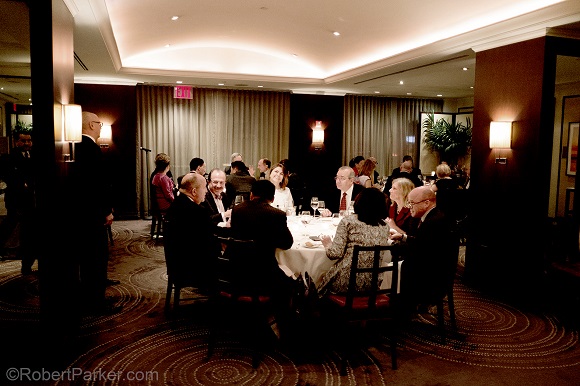 With special guest Frédéric Engerer, administrator of Château Latour, and Florence Rogers-Pinault, the owner's daughter, this special meal set up by The Wine Advocate turned out to be a spectacular evening of friendship, great wine, and amazing cooking from Daniel Boulud at his flagship restaurant in New York on 65th Street.The hors d'oeuvres alone could have made a meal, with fabulous items such as the Shigoku oyster with Ossetra caviar, a quail and black truffle ballotine, a smoked eel and hamachi terrine and a black truffle and porcini pomponette. With that course we had the newly released 2002 Krug champagne, a full-bodied, powerful champagne that Krug released at 14 years of age. It is still an amazing, young sparkling wine that probably has a good 40 to 50 years of aging potential. It was quite a treat to start the evening. 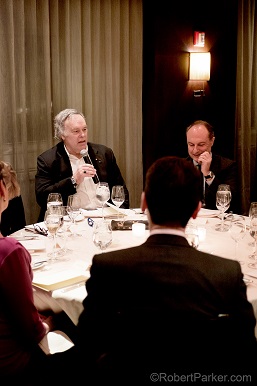 We then moved to the first vintage that the Pinault family had complete control over in one of the smallest (just under eight acres) single monopole vineyards in the world, Château Grillet, in the heart of the Northern Rhône Valley - the south-facing amphitheater essentially enclosed in the nearby bigger appellation of Condrieu. The 2012 Château Grillet was a brilliant wine, showing terrific minerality, citrus and subtle but nuanced tropical fruits as well as great length, precision and focus. (I have been persona non grata at Château Grillet for more than 30 years because of my criticism of the mediocre quality that existed under the previous ownership, but that has all changed in the hands of François Pinault and his administrator Frédéric Engerer. With this wine, we had a gorgeous scallop dish with endive, only to be surpassed by an amazing slow-baked John Dory, which the French call St. Pierre, with black truffle and leaks, accompanied by a horizontal showing of the second wine - Forts de Latour. The genius vintage of Forts de Latour looks to be 2010, although the 2009 was probably the favorite for drinking with the food, as it is much more open-knit and on a much faster evolutionary track. The 2005 showed well, but it was clearly out-classed by the luxurious fruit of the 2009 and the magnificent structure, density and richness of the 2010, which could easily have been the Grand Vin in a blind tasting. 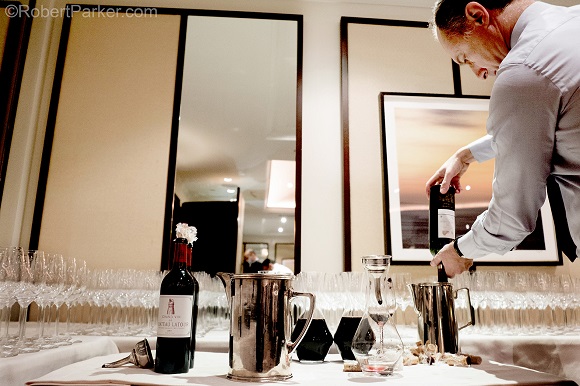 We then moved to a wonderful lobster dish with a mushroom civet sauce that went perfectly with one of the most underrated recent vintages in Bordeaux - 2008. Château Latour's 2008 was drinking well and can be consumed now or cellared for another 15-20 years. I think it is always going to be one of those under-the-radar vintages because it received so much criticism before the grapes were even harvested. But the top properties made severe selections and the wines came out priced fairly low. Very good quality was achieved by the better estates. This wine shows a deep ruby/plum/garnet color and is evolved for Latour, but reveals the classic blackcurrant fruit, cedar wood, earth and spice in a medium to full-bodied, supple style.The next flight was of three very different Château Latours, clearly mirroring the totally different vintages from which they were conceived (2000, 2001 and 2003). With these we had an absolutely spectacular dish of pithivier of squab with foie gras, porcini mushroom and blackcurrants. This was just a tour de force from Daniel Boulud, served in a pastry shell with wonderfully cooked squab, the foie gras setting off the porcini mushroom and the flavor of the squab. I was sitting to the right of Frédéric Engerer and we were somewhat at odds over the quality of the Château Latour 2003. Engerer thought it was too flamboyant and dramatic to be classic, while my taste suggested that this is one of the all-time great Latours from a ripe vintage, but a style that is lavish while not over-the-top. The wine seemed to be the hit of the crowd (we took a hand count for this flight), which was not surprising as it is a bigger, richer, fuller wine than the more restrained and rather classic 2001, which was drinking well. Still somewhat closed, but just beginning to open for business was the brilliant and prodigious 2000. All of the wines had a sensationally deep purple color, with the 2001 showing slightly more garnet, and the 2000 looking more like a barrel sample, even though it was 16 years of age. However, the vintage is coming into its early adolescence and that is a good sign, as many of us who purchased 2000s have been waiting and waiting. The 2003 will need to be watched with care, as it seems to be on a relatively fast evolutionary track. Nevertheless, it is a spectacular wine and one of the great Bordeaux of this vintage along with Montrose and Lafite Rothschild. These three wines achieve perfection. 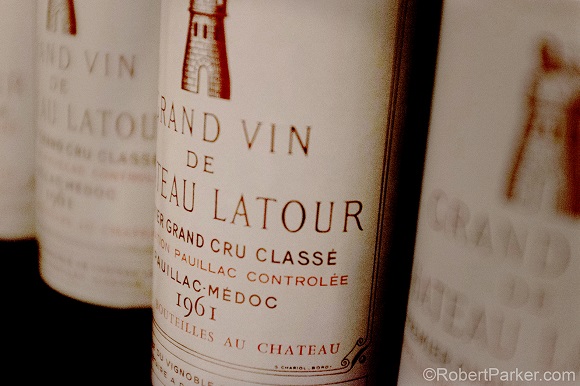 The next flight was two brilliant wines from two completely different styles of vintages - the Château Latour 1996 and 1982. With this flight, we had a wonderfully delicious filet of Wagyu. The 1996 Latour is from a vintage that favored the Médoc over Graves and the Right Bank. This vintage was saved by a cool, windy, sunny, dry month of September, allowing the Cabernet Sauvignon skins to get ripe and thick, resulting in a structured, classic, medium to full-bodied Château Latour that is still vibrant and youthful, while showing fabulous fragrance and complexity. It is a beautiful wine, but the 1982 is a legend and a more modern-day version of the wine that followed - the 1961. The 1982 Latour was dense, ruby/purple with incredible opulence and sweetness of fruit, beautifully ripe tannin, and a long, layered finish that went well past a minute. We finished with the Château Latour 1961, which is one of the 20th century's most profound wines. I can't say it is better than the 1982, it just has even more complexity, since it is 21 years older. But, wow, the youthfulness this wine holds onto with its incredible nose of crème de cassis, cedar wood, baking spices and a touch of lead pencil shavings, this full-bodied, opulent wine is magnificent. Everyone commented that it is hard to believe how these wines age so remarkably long. Keep in mind that the 1982 was 34 years of age, and the 1961 was 55 years old!Altogether this was an absolutely perfect night, with some of the best food I have had from Daniel Bouloud in many a year, and phenomenal wines, as one would expect from one of the world's greatest vineyards - Château Latour. 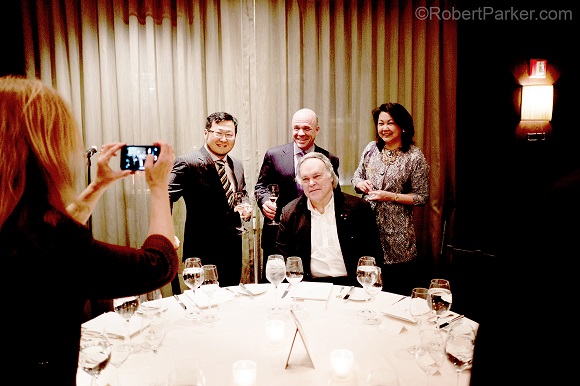 A lookalike, authentic French bistro, Petit Louis in Baltimore's Roland Park is the creation of restauranteurs par excellence Cindy Wolf and Tony Foreman. You feel like you’ve walked into a bistro on the Left Bank of Paris when you enter Petit Louis. The food is classic bistro, and they do it well. All of the courses we had were flavorful, sometimes a trifle rustic, but delicious in their intensity. This was good comfort food prepared extremely well. The wines started with one of the major surprises for me over the last year, the 2006 sparking wine from Tony Soter in Oregon. I had this several times while I was out visiting Oregon, and I had always been impressed, but this is a 10-year-old sparking Rosé that is just sensational, and I’m talking world class—it’s that good. Something this good from France would cost at least two to three times as much, so kudos to Tony Soter. The 1995 Billaud-Simon Chablis Mont de Milieu was oxidized and undrinkable. The 1996 Zind-Humbrecht Pinot Gris Clos St. Urbain Rangen de Thann was sweet, and although it went well with the foie gras, it was just a little too unctuous and sweet a wine...

This was a spectacular night of fabulous food at La Toque in Napa, California. Every course was right on target, and we had the joy of hosting Château Cheval Blanc’s administrator Pierre Lurton for this night with Wine Advocate subscribers.