When it came to arranging lunch at a decent Italian back in April, somewhat to my surprise, I was left scratching my head. What exactly are the alternatives to Pizza Express? A decade ago, I got my pasta fix at three of four Italian establishments that served authentic cuisine and decent wines. Zafferano in Knightsbridge was one of my regular haunts. It was good enough for Russian oligarch Roman Abramovich who sat nearby one lunchtime surrounded by a battalion of burly, menacing bodyguards eyeing our 1982 Cos d'Estournel suspiciously. Anyway, that closed. There is Enoteca Turi in Putney but that's a bit too far out of central London. Locanda Loccatelli? Have to cross that off my list after I embarrassed myself in front of Giorgio Loccatelli. Apparently I swung my arm around the Giorgio's shoulder and told him I loved him, although recollections were instantly erased by excessive consumption of Barbaresco.

Eventually I plumped for Bocco di Lupo, just a five-minute walk from Piccadilly in Soho, nestling in the heart of theatreland. Opening back in 2008, the name translates as "mouth of the wolf", which unless Monica informs me otherwise, loosely means "good luck". And I recommend being as hungry as a wolf since we all know how filling pasta can be.

Bocco di Lupo turned out to be an inspired choice.

I visited on Saturday lunchtime and I advise booking in advance because it was heaving with families and what felt like a kindergarten of infant gastronomes. The buzzing atmosphere ricochets off the walls. It is lively and at times a bit noisy, though never deafening, the occasional hollering from waiters weaving their way from marble grazing bar to tables, that might be too closely packed together. With four of us at our circular table we soon ran out of space to the point where there was barely enough for the cutlery. That is a minor gripe.

The cooking met my expectations, the menu challenging to navigate at first, a mish-mash of small and larger dishes with plenty of Italian ingredients and specialities written in their local dialect that needed explanation. That's usually a good sign. I also asked our waitress to give some indication of portion size so that I avoided over-ordering. 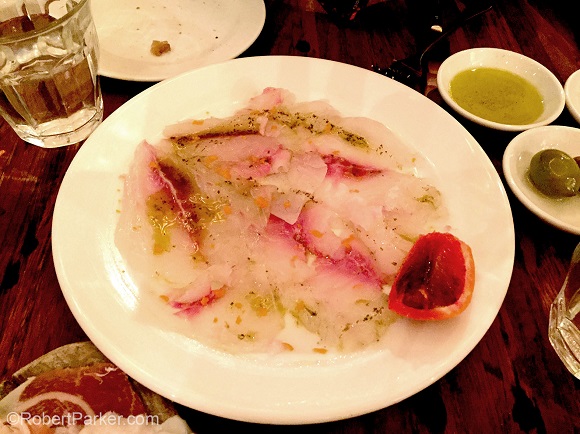 We started with an outstanding sea bream Carpaccio with blood orange & rosemary, the best of several dishes. The fish was exceptionally fresh and the combination with blood orange and rosemary left the taste buds feeling...exhilarated! The blood orange lent sweetness and the rosemary, not an obvious partner with sea bream, was wonderfully nuanced. I had to resist ordering a second plate. The crescentine and bocconcini Mozarella with Parma ham had the unenviable task of following the Carpaccio and did a decent job, though I would have liked a little more oiliness in the ham. 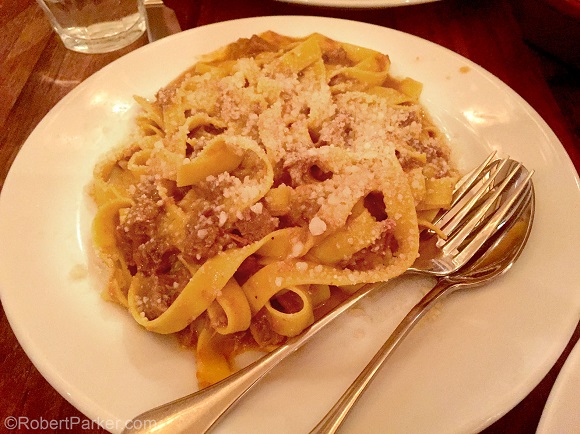 That said, the Manzo di Pozza—home cured beef, pecorino & rocket—was fabulous. I could have done with a pinch more seasoning on my tagliatelle with ragú Bolognese, then again, there I was mopping the plate with the delicious bread. Personally I preferred the tortellini, here served with pork and prosciutto, cream and nutmeg, yet another bread mopping exercise. The risotto of Italian Mazzancolle prawns worked beautifully, succulent and juicy and second only to our Carpaccio and by that time, my stomach was telling me it was satisfied.

I have to commend the wine selections: a very comprehensive and original list that thinks outside the box. Indeed it won Best Wine List in at the Tatler Restaurant Awards in 2013. Do not come here expecting a list of Barolo or Chianti from well-known producers. Scanning the list there are many growers off the beaten track and explore less familiar regions, particularly and refreshingly so towards the more undiscovered and value-ridden south of the country. I ordered a 2014 Fiano d'Avellino Béchar from Antonio Caggiano that hit the spot. I have a soft spot for great Fiano. I adore the subtle spiciness and texture, an Italian white that can partner dishes more suitable for a red.

It seemed clear that the best way to approach Bocco di Lupo is tapas-style, alternatively order a huge and scrumptious looking leg of lamb and get everyone to dive in. We opted for the former, which meant that the bill was not excessive, especially given the quality of the food. With its perfect central location, variety of dishes and authenticity of ingredients, not to mention the enticing wine list, I now know exactly where to head the next time I crave proper Italian cuisine.

I wonder if Roman Abramovich has been here yet?