Just south of the tourist mecca of Biarritz lies the port of Saint-Jean-de- Luz. I guess you could call it the last French seaside town before you cross into Spain and life becomes 30% cheaper. It does not have the pizzazz or the glamour of Biarritz, however, there are enough attractions to draw its own crowd. They can enjoy the fresh sea air along harbor walks, watch the fishing vessels chug out into the Bay of Biscay or simply mill about its busy pedestrianized center that heaves with tapas-style restaurants. Now, I don't know about you, but I often find that when I visit tourist magnets such as this, it is difficult tracking down restaurants that cater for the epicure or oenophile, rather than the majority that are content to deal out a lively atmosphere and average, if rather ordinary grub. That is why I penned this "HG".

Looks can be deceiving. Café Le Suisse is a large restaurant situated on the central square opposite the bandstand, where street artists sit behind easels sketching tourists that self-consciously pose for what seems like eternity on wobbly stools. Le Suisse is often packed with tourists soaking up the lively atmosphere on the vast plateau of outside tables and for all intents and purposes, it looks like many other restaurants. What distinguishes Le Suisse is the above average fare and a wine list that surprisingly offers some well-chosen vino.

We took one of the tables away from the main square where it is quieter, where there is less chance of a band breaking into Lady Gaga covers on the bandstand making it impossible to talk. I felt that the service here was a little "pressured." The waiter looked harried even though most tables were empty. (Gallic waiters are masters of looking stressed and busy when the restaurant is virtually empty.) I became a little annoyed upon selecting a 2011 Les Calcinaires from the brilliant Domaine Gauby. No doubt clocking a customer prepared to spend a few Euros on something more than the house white, he coerced me towards a Châteauneuf-du-Pape Blanc at (quel surprise) double the price. I know, I know - he is only doing his job. I put my foot down and insisted upon the Calcinaires without mentioning my basic understanding of fermented grape juice. 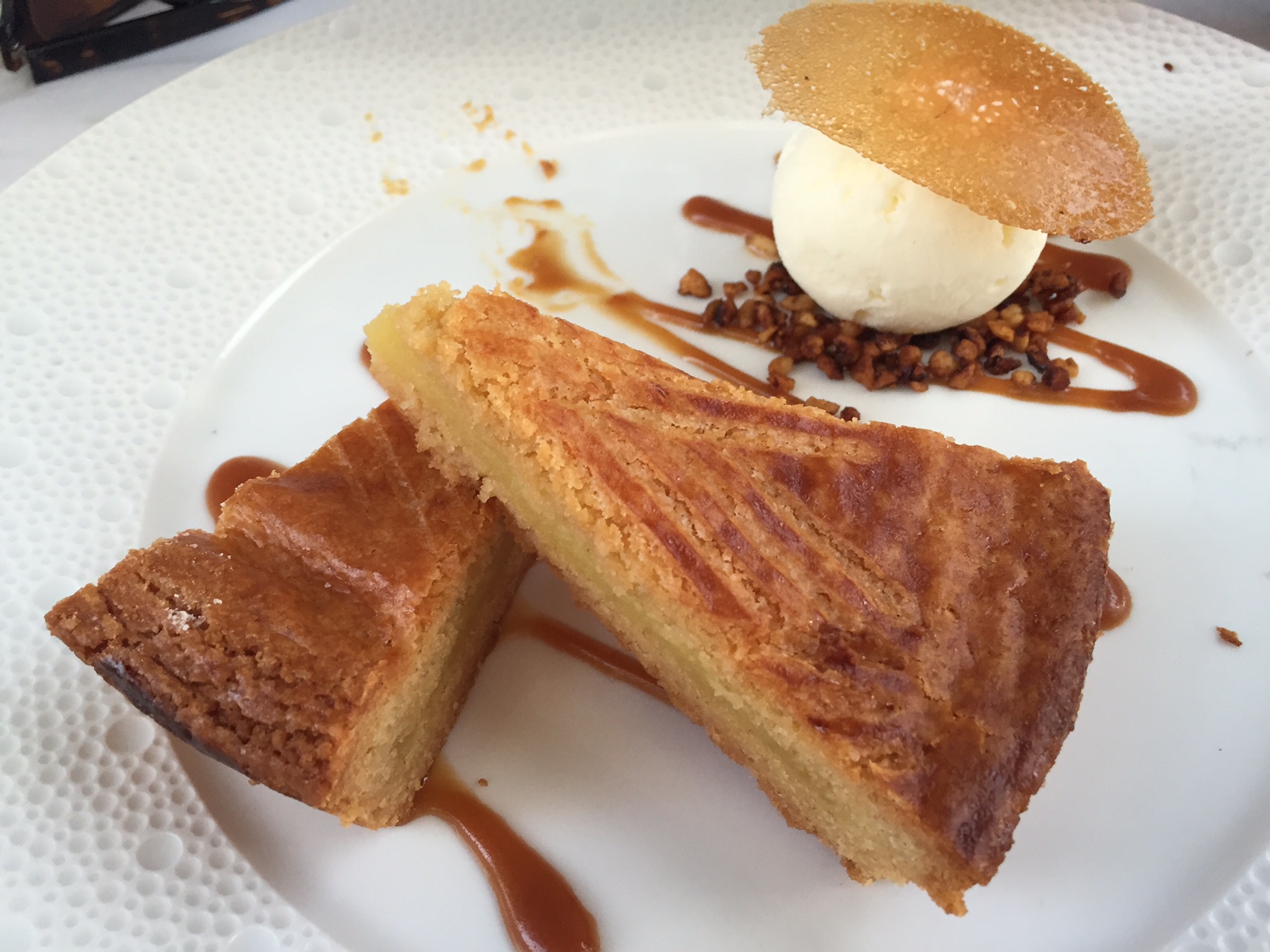 The food here is top notch. The starter of salami and cornichons was delicious, a little more peppery than I was expecting, but the plate was soon vacuumed up. I chose a whole hake with a red pepper and cucumber vinaigrette, the fish brought out for inspection: all bulbous eyes and grinning fangs. That God there is an inverse relationship between fish's aesthetic charms and their deliciousness. It was wonderful, perhaps not quite as refined as the hake that I ordered a couple of days later at Casa Cámara, but far better than I suspect a lot of Le Suisse's competitors. We finished with an obligatory Gateau Basque and vanilla ice-cream, one of those guilty pleasures that you have to order whenever in the namesake region.

No, it is not the best restaurant around the Spanish/French border. However, sometimes it is useful to shine a light on a place that delivers over and above within a busy tourist town when there are so many options. There were plenty of people occupying nearby tables tucking into what appeared like generous fruits de mer, a specialty of the restaurant. It's not the kind of the establishment where I expected to find interesting bottles at reasonable prices and so I departed feeling I got my money's worth. And what d'ya know, even the waiter relaxed as the tables began to fill. Perhaps there is an inverse relationship there also?