Growing up in an Italian household, I have always felt most connected to my Italian heritage. So when my husband spontaneously decided we should travel abroad this holiday season, there was no question in my mind that I wanted to go to Italy. Now, it should be noted that spontaneously booking a European vacation is not something my husband and I have ever done before nor take lightly, but we were both in the mood to do something a bit crazy. So after a long day of perusing flight options and prices, we finally found a good deal flying out of SFO the day after Christmas.

In the coming weeks, I will be sharing my experiences and recommendations for the destinations in which I spent time during my nine days in Italy: Milano, Genova and Alba—as well as the day-trip we took to Cinque Terre. To get started, here is a bit of background on each of the destinations... 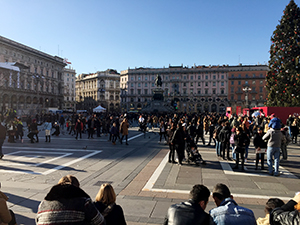 Milano: Known as the home of fashion and big business capital of Italy, Milano reminds me a lot of San Francisco in its densely-populated, “big city” feel, full of high-end shopping, fine-dining restaurants and plenty of sightseeing. The major attraction in Milano is the famous Duomo—the second largest cathedral in all of Italy (the Vatican's St. Peter's Basilica is the largest)—whose construction began as early as 1386. Seeing the Duomo alone made flying into Milano worth it. Getting around in Milano is easy because the public transportation system is extensive, with buses and trolleys above ground in addition to an underground metro. And of course, walking is always enjoyable because there is just so much to see. In fact, on one afternoon wandering around, my husband and I chanced upon a late-medieval castle—that doesn't just happen anywhere. With that being said, spending time in Milano can be a bit pricey, so on our trip we spent two days there—on our arrival day and our final day before departure—then split up the rest of the trip between Genova and Alba, with a day trip from Genova to Cinque Terre. 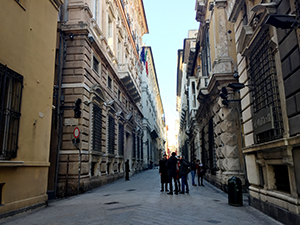 Genova: This coastal port city is home to about 590,000 people and it definitely feels that way when you walk through the old, narrow streets known locally as caruggi. These winding, narrow pathways—whose names are hard to find when navigating them—are very easy to get lost in if you are a visitor. They dead end into other streets and/or become another street altogether, and nothing is laid out in a grid-like fashion. One minute you think you know where you are and the next you end up somewhere completely different. It took my husband and I the first full day of getting lost and reorienting ourselves to get the hang of the caruggi. But once we did, Genova was an authentic breath of fresh air after the modernity of Milano. Filled with cafés/bars—because yes, just about every café is also simultaneously a bar in Italy—endless focaccerias (focaccia shop), pasticcerias (pastry shop), gelaterias (gelato shop) and palazzos (ancient palaces), there was almost too much to explore in the four days we stayed there. It was a good “problem” to have. 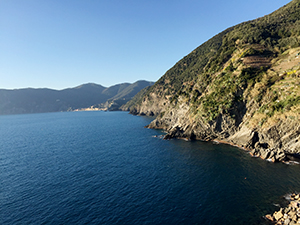 Cinque Terre: The name literally translates to “five lands” and encompasses the five ancient, coastal villages that perch upon the steep cliff sides of the beautiful Ligurian coast. Quaint as they are, these five villages have become quite famous and have seen an upswing in tourism in recent years. From north to south, the villages are Monterosso, Vernazza, Corniglia, Manarola and Riomaggiore. And although they have become a sort of bucket-list destination for tourists, these villages are as authentic as ever. They are each very small, but offer an impressive amount of trattorias/osterias, cafés/bars, shops with artisanal food products like fresh salami and cheese, and endless views of the rugged Ligurian coastline. The apartments and homes in Cinque Terre are a rainbow of colors that precariously sit on the steep cliff sides, overlooking small harbors that dock tiny fishing boats. You can choose to take the train from village to village, or spend several days walking the pathway that goes from Monterosso all the way down to Riomaggiore. 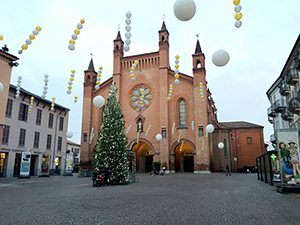 Alba: You may know of the city of Alba if you are a lover of Italy’s most age-worthy wines: Barbaresco and Barolo, which are the two local DOCGs (appellations) located just outside of Alba, and make exquisites wines from the indigenous Nebbiolo grape variety. And though less age-worthy, other local varieties such as Barbera, Dolcetto and Arneis can be quite delicious. Much smaller than both Milano and Genova, Alba has a population of about 32,000 and the city center itself is easily walkable from one end to the other. Alba has an interesting mix of old and new, with a lot of high-end boutique shops carrying clothing and artisanal food goods—most notably products made with the famous white truffles, locally called tartufi bianco—juxtaposed against cobblestone streets and ancient churches. Of course, there are plenty of cafés/bars, and given that Alba is in the heart of the Piemonte wine region, the wine scene here was the most notable of our entire trip. A nice mix of local trattorias/osterias and snazzier restaurants further emphasized the duality between old and new in Alba. I imagine this city must be an ever-growing tourist destination, given all that it has to offer despite its small size.

Stay tuned for in-depth looks at my culinary and wine adventures in Milano, Genova, Cinque Terre and Alba!

If you’re a wine-country foodie, Santa Rosa’s new City Garden Doughnuts & Coffee is sure to have popped up on your radar. With its grand opening today on National Doughnut Day—June 2—City Garden is primed to bring locals and visitors the highest quality doughnuts they’re ever tasted.

Italian varietals are a-plenty across the vast appellations of the country. And while most of the red varietals are made for red table wines, there’s actually quite a few that are used for Rosé production as well.