Max Ng is the executive chef of David Chang’s Momofuku Ssäm Bar in the East Village, recognized by our inspectors as the “Singapore native” who creates “the kind of memorable food that patrons crave and return for again and again.” Ng’s dishes like shrimp crudo with shaved kimchi ice and pandan-flavored coconut-custard pie harken back to the Ko alum’s roots in Southeast Asia, where he lived for 20 years before joining Chang’s operation in New York City.

Home to 5.6 million residents (39% of whom are foreign nationals), Singapore is an island two-thirds the size of New York City located off the southern tip of Malaysia. Ng’s training reflects his heritage in one of Asia’s most ethnically diverse food cultures. 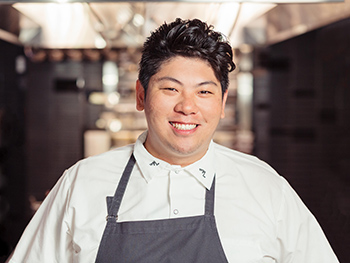 As a young chef, Ng worked for the Les Amis Group, one of Singapore’s most influential restaurant groups responsible for 18 concepts and 26 outlets on the island, as well as multiple concepts overseas in Hong Kong, Myanmar, Vietnam and Indonesia. “Singapore [has] such a diverse society,” Ng says. “[It] has influences from all the cultures that reside [there].”

From open-air hawker centers to air-conditioned food courts and celebrity resort restaurants, the republic is famous for its hybridization of Southeast Asian cuisines.

To get a sense of the diversity, Ng recommends visitors start by wandering through Chinatown, Little India and Geylang Serai—one of Singapore’s oldest Malay settlements. “Every single spot has its own beauty,” he says, “and the food is just incredible.”

For casual dining in Singapore, Ng’s favorite hawker center is next to the East Coast Park Lagoon. “We used to live around that area for years and we would often take strolls by the park and the beach,” he says. “We’d always end up having dinner there on the weekends. Visiting [this area] is nostalgic for me.”


For a more formal and traditional Singaporean meal, Ng leads friends to the one-MICHELIN-starred restaurant Labyrinth. “Chef LG Han has a tasting menu to showcase some of his favorites in Singaporean food,” says Ng. “In one meal, you'll get to taste the influences of multiple [cuisines] on Singapore cuisine.” Our inspectors also note the restaurant’s small bar, which is “a great spot for a breezy cocktail and a chance to chat to the keen, well-informed staff about what awaits.”

Another of Ng’s favorite restaurants is MICHELIN-recognized Keng Eng Kee, which features Tze Char, a sub-culture of Singaporean cuisine. “My personal favorite [dish to order] is the Mingzhu roll and [the] moonlight hor fun, amongst the other classic dishes such as chili crab and cereal prawns.” Our inspectors also add recommendations for the stir-fried ginger onion crab, coffee pork ribs and claypot duck with sea cucumber and note the “particularly delicious” stir-fries.

For a break from all the food, Ng recommends several places of peace and quiet amidst the city bustle. “Singapore is a small country that is mostly city life and buildings,” he says, “but there are great places to enjoy nature too.” When visiting, he recommends stopping by the Singapore Zoo, a 28-hectare rainforest environment on the margins of the Upper Seletar Reservoir. He also recommends Jurong Bird Park, Asia’s largest bird paradise, home to 3,500 birds and more than 400 species.

For a unique experience by night, Ng sends friends to the Night Safari, the world’s first nocturnal zoo with lighting to resemble the moon developed by London-based designer Simon Corder. Animals here—30% of which are endangered—range from chital deer and gaur to Indian rhinoceros, pangolins, tarsiers and Asian elephants. Most historical among Ng’s nature recommendations is the Singapore Botanic Garden, in operation since 1859 and one of three gardens (and the only tropical garden) to be named a UNESCO World Heritage Site.

For city highlights, Ng’s favorite are the “supertrees” aka Supertree Grove at the famed Gardens by the Bay, a collection of 25- to 50-meter-tall tree-like structures with large canopies that come alive at night in a display of sounds and light. Stroll along the 128-meter-long aerial OCBC Skyway and enjoy panoramic views of the gardens below.

Singapore holds many world titles including the world’s smartest city, most religiously diverse country, safest country and most expensive city to live in. “It's up to you to pick you own adventure,” says Ng.

Eat and drink your way through The Big Easy with Chicago-based chef Noah Sandoval.