Upon meeting Nick Kim and Jimmy Lau, chef/owners of Shuko in New York City, common phrases like “friendship first” and “meeting of the minds” are some of the first things that come to mind. 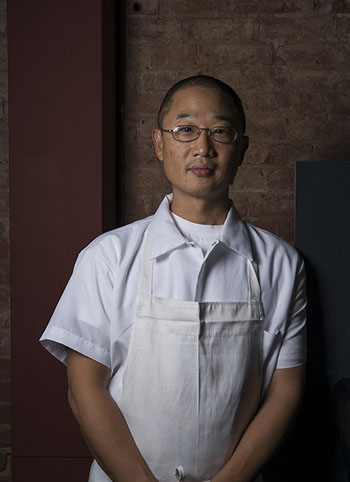 That’s because the pair have a long history, working side-by-side throughout their career and becoming aces in Japanese restaurants—all while having roots outside of Japan.

Born in Los Angeles and a son of Korean immigrants, Nick Kim developed an interest in cookery at a young age during travels to Japan with his mother. In a path similar to many cooks, he started as a dishwasher in a local French bistro before heading off to the Culinary Institute of America in Hyde Park, New York. After graduation, Kim’s resumé got filled by celebrated French restaurants including Michel’s in Honolulu and local Angelino pioneer/chef Ludo Lefebvre’s L’Orangerie.

But it was during a trip to France that Kim read the LA Times review of Masa Takayama’s Ginza Sushi-Ko. Enamored, Kim shifted gears. “As a cook, I think everyone falls in love with not only with the Japanese food itself but also with the entire culture,” says Kim, who has likened it to that of a type of zen or church. “The care and the respect to seasonality is beyond.” He applied for a position, first working as a stagiére before working his way up to head chef. In 2003, Kim was then asked to move to New York City to help open Takayama’s namesake restaurant in the Time Warner Center.

That’s when he met Jimmy Lau. 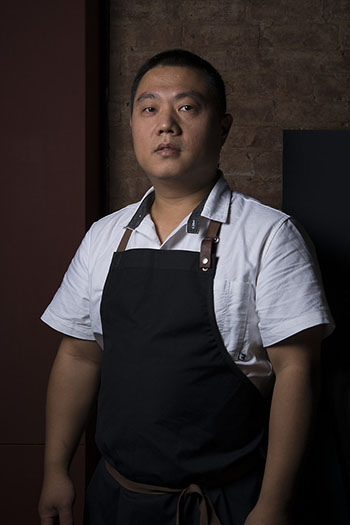 A native of Fuqing, a coastal city in China’s Fujian Province, Lau spent his early years cooking over live fire with his mother and frequently took jobs helping his uncle in a local catering hall. He came to New Work when he turned 18 and worked as a busboy in Chinatown.

Japanese fare caught his eye, which led him to apprentice at sushi restaurants and eventually master the art of sushi making. “I find that Japanese cuisine can be so delicious but also so simple at the same time,” he says. “You slice fresh fish, pair with rice, soy sauce and wasabi—just simple ingredients [and] simple seasoning, but a beautiful taste.” Lau furthered his education by taking a road trip of a lifetime, learning French, Italian and Turkish cuisines, before returning to New York to become the head chef at Bar Masa.

It was an immediate friendship. “Our views on food were too similar to not get along instantly,” says Kim.

During their tenure at Columbus Circle, the two often spent their lunch hour with one another, talking about the future and the possibility of opening up a restaurant together. Kim decamped from Masa in 2009 to start what would soon become Neta; once it was properly established, Nick followed suit and joined the team at Neta. A year later the duo departed to open up Shuko, a nondescript, dimly-lit 20-seat sushi counter a stone's throw from Union Square.

The focal point of the restaurant is the three-sided counter made of white ash, or tamo. “It’s a thing of beauty which you’ll find unable to resist stroking every now and again,” state inspectors. And no wonder—Kim sands it everyday to achieve a smooth, calming texture. (This was a lesson well-learned during his days at Ginza Sushi-Ko.)

Both an omakase and kaiseki menu, running at $155 and $195, respectively, are offered at Shuko—and the pair's vast styles of cooking experiences are reflected in the cuisine. Highlights include skirt steak, fatty tuna delicately seared on charcoal and mackerel, which is among Kim’s favorite fishes to work with. “Mackerel will always be the underdog,” he says. “It’s one of the few fish where you can leave the bloodline intact in order to show off its beautiful freshness.” Lau agrees, expressing his love for the Spanish breed. “Fresh Sawara without the skin offers a buttery and creamy taste with good texture.”

The team’s personal favorites include the house-made milk bread, toasted and served alongside toro tartare and Osetra caviar, and pickled Thai chiles, which are served atop the grilled toro sinew. (Note to readers: declare your preferred level of spiciness as Lau tends to have a higher tolerance than most.) All of this is topped off with a selection of desserts, including Kim’s homage to his nephew, an apple pie that’s been laced with miso and topped with vanilla ice cream. (And when not in their restaurant, Lau frequents SoHo hotspot, Charlie Bird, while Kim likes to dine at Dan Kluger’s nearby Loring Place.)

Kim and Lau's cuisine at Shuko falls in line with their training. “I loved how [chef Masa] took Eastern and Western cooking techniques and integrated it into his own unique cuisine. It really inspired me to open up my palate,” says Lau. Kim adds, “I have the ability to see and create my own ideal of beauty.”