Matt Accarrino, executive chef of one-Michelin-starred SPQR in San Francisco, has had a tumultuous relationship with his bike. Growing up in New Jersey, Accarrino started racing in his early teens. When he was 20 years old, he suffered a serious leg injury and had to rack up his bike.
“I had a bone tumor—my leg shattered and I ended up in the hospital,” Accarrino recalls. Though the doctors considered amputating his leg, since he was so young, they instead insisted on restructuring the leg using metal, coral and more bone. After an invasive surgery, he couldn’t walk for two years, and still has a scar that runs from just above his right knee all the way up to his hip.
“That was probably the hardest thing I had to do—to learn to walk for the second time.” 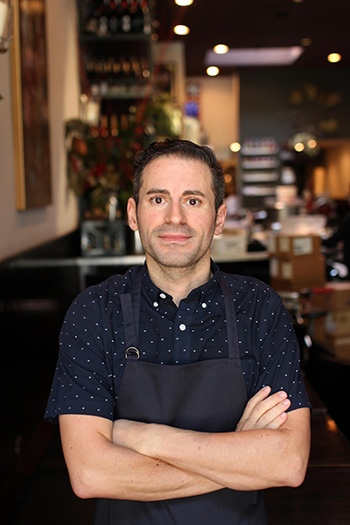 It was then that Accarrino found his second love of his life: cooking and working in venerable kitchens, including Per Se and Craftsteak in New York City. In 2007, he moved to California and worked as the chef de cuisine at Craft Los Angeles. Two years later, he was given the opportunity to run the kitchen at SPQR; he’s been there since, drawing inspiration from his Italian heritage.
It wasn’t until Accarrino got to the Bay Area that he wanted to ride again, some 15 years post-op.
“I realized it was something that I’ve been missing from my life,” he says. “I was 180 pounds at 5’6” and uncomfortable.”

After making some connections with folks he had previously known, Accarrino got back into bike races, ranging from casual rides to long distance 100-mile Gran Fondos.
He rides anywhere from 10 to 20 hours a week, and his 2018 season is in full swing. (His first event of the year was a circuit race in the East Bay of Berkeley Hills.)
“It’s an incredible way to clear the mind and destress,” he furthers. Cycling has also tweaked the way he looks at cooking. “I’m not trying to turn SPQR into a health restaurant by any means, but I’m focused on lighter cooking and less focused on meat and dairy.” Ingredients like chia seeds and flax seeds are used to thicken sauces. Corn starch, as well as roasted garlic purée and abalone liver butter, are used to thicken the cream in the abalone alfredo.
Ask if he’s on a team, and he’ll be quick to tell you that he’s an army of one—he even built his own kit. “I’ve had offers to join, but I need to be kind to my work schedule.” Generally speaking, a registered cycling team must compete in a certain number of races per year. “I try to make racing my priority during the season, but the restaurant is my life.”
Accarrino’s daily routine is straight-forward: he’s up between 6:00 and 7:00 a.m., and immediately makes himself a pour-over coffee. “I used to drink drip, but I would drink too much. If I limit myself, I could make one really good cup of coffee a day.”
Due to the start of the season, he doesn’t consume breakfast to lose the last percent of body fat. Once that goal is reached, breakfast consists of oatmeal or pancakes. “I make my own mix that has a ton of buckwheat and quinoa—and extra protein,” he says. His go-to toppings are maple syrup, almond butter, bananas and toasted almonds or pecans. Breakfast is the time when Accarrino can enjoy a Netflix binge—currently, it’s Breaking Bad—before heading out for a ride and then into work.

Like many athletes, Accarrino has a coach who helps him be the best he can be, scheduling “A” races throughout the course of the January to October season, some of which are familiar. Accarrino has a special fondness for the Bariani Road Race (sponsored by Bariani Olive Oil); he placed first in his age group two years ago. For the last three years, he’s been apart of the annual Larry H. Miller Tour of Utah as acting chef. He’s also currently working with the Italy-based Maratona dles Dolomites team to be their official chef and culinary ambassador for their stateside races held in San Francisco, Utah and Asheville, North Carolina.
“Stuff like this ends up on my calendar as well as regular races.”
Calling himself an “incredible batch cooker,” Accarrino refuels on lean protein, grains, seeds and roasted vegetables post-ride. He’s also started making his own recovery shakes by taking apart and reassembling the nutritional products for himself. “There are milk proteins that burn slower and milk proteins that burn faster,” he states. “The mind of a chef.”
On rest days, the kitchen calls at an earlier hour. “That’s the siren call—I can hardly stand to not be in the kitchen trying to take whatever it is to the next level,” he says. “I’m lucky that I can get my mind around to think about training then go to work.”
Now 40 years old, Accarrino is perfectly content with his life in and out of the kitchen. “I see all of those different roles for cycling in my life and cooking—and the two constantly come together for me,” he says. “There aren’t these two disparate things that have no relationship to each other. Everything is interconnected and inter-related.”
“People will tell you that their marker for success is a Michelin star—and those are incredible. But for me, it’s peer appreciation. If someone says, ‘he’s a good chef, he makes good food,’ that means the world to me. Likewise with racing. I’m a person who’s found my own path.”
Headshot courtesy of Postcard Communications.
Hero image by Francis Baker.