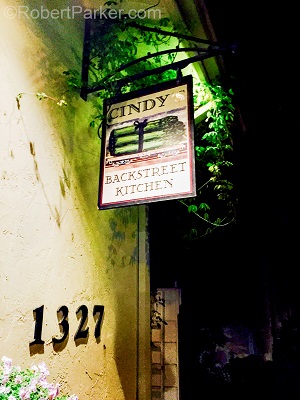 I must have first visited the 30-plus year old wine country culinary institution that is Cindy Pawlcyn's Mustards Grill in Yountville over 10 years ago. I still remember the melt-in-your-mouth lemon meringue pie I had back then, topped with the most enormous egg white pouf I'd ever seen. So when a fellow wine writer of some notoriety (notorious, in fact), whom I had sadly missed meeting at the Napa Valley Wine Writers' Symposium, suggested we do dinner at Cindy's newer venture (established in 2003) in St. Helena, I had one of those Homer Simpson "mmm...meringue..." moments before accepting.

Being kinda new to Napa town, I was unaware that glamorous St. Helena had any backstreets. Turns out it does. Cindy's Backstreet Kitchen is on the posh, Main Street side of the Railroad Avenue tracks, right across from the Safeway that's perched on the other side of the tracks. Apparently this Backstreet building used to be a bordello in the 1920s, which I guess has now moved over to the Safeway parking lot. The facade and interior of the renovated restaurant are understated and unpretentious with that Napa Valley country charm theme happening. Indeed, this is casual "backstreet" dining done well, where the focus is on synergistic flavors and the clientele are real friends.

The food was satisfyingly tasty. We both went for the specials of Thai Chicken Soup - served with fresh chili, cilantro and lime - followed by Roast Lamb with Polenta. The portions were ample and the flavors robust and uncomplicated. I brought a bottle of 2010 Cullen Kevin John Chardonnay, which I had hand carried back from Margaret River last year. (Curiously, the liquor store next to the Margaret River IGA had a very good deal on this gorgeous wine while I happened to be there, so I bought all the remaining few bottles of 2010 they had left.) Still very tight, citrusy and youthful, it made for a gorgeous aperitif and match for the Thai ingredients, but I won't be touching my remaining 2010 Kevin Johns for a few years yet. My companion brought a bottle of 2006 Foradori Granato. Never had it before; loved it. It opened with a pleasant savory funk that morphed into Bovril and earth flavors over a cherry core, with a good, firm tannic backbone. 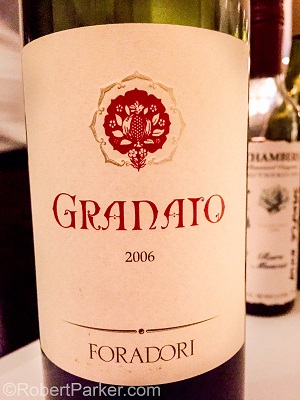 My Cindy's meringue moment was not to be repeated that night. For a start, it wasn't on the menu. But I had also brought with me a super-sweet, gloriously unctuous half bottle of Chambers NV Rare Muscat from Rutherglen, which we substituted for dessert. I'd tasted the wine earlier that day for my upcoming Victoria report and just couldn't bear not to share it. Molten nuts, exotic spices, incense and molasses - it was an "mmm...Muscat..." moment, and this is how Cindy's Backstreet Kitchen will now be remembered by me.

Worth noting: the service was professional, attentive and the corkage fee was waived completely. Absolute thumbs-up there!

Course 2: -  Roast Lamb with Polenta (special of the day)

Great sashimi has other factors besides freshness that render it great, e.g. it should be tender yet firm and never mushy—but the texture, like so many of sashimi’s attributes, is linked to the freshness.

Farmstead in Napa Valley’s St. Helena has become a staple haunt of a wine friend and I, who meet regularly to set the wine world right. Offering great seasonal, fresh, flavorsome and skillfully prepared food and a bang-on reasonable corkage charge, it has all the winning wino/foodie ingredients.