Indoctrination? Child abuse? You might describe it as one of those things. Possibly both. But when I brought a bundle of joy into this wretched world, I vowed never to let them fall victim to the one thing that can ruin childhood...vegetarianism.

You may ask what compelled us towards that decision. On my side, greens never agreed with my fastidious taste buds, an aversion extant. This was compounded by a very lovely, but extraordinarily militant vegan ex-girlfriend whose relationship with meat was akin to Donald Trump's fondness for a transgender illegal Muslim immigrant of Mexican descent. Our relationship skidded off the tracks not because of dying ardour, rather the challenge living a life inside a five-mile meat and dairy exclusion zone. I began hallucinating spare ribs. I would nibble fingertips as an amuse bouche. I concluded that God gave me sharp incisors for a reason and that reason was not to facilitate the chewing of celery.

Secondly, the last time I looked, my wife is still Japanese. There are relatively few vegetarians in Japan compared to other countries. It stems from their culinary obsession; ipso facto they cannot countenance forsaking such a dominant and sacred part of their diet. Cooking is a religion that pervades society, from Michelin-starred gastronomic temples down to the Pokemon school lunch-box. Though the country is synonymous with everything fish, Japan is certainly no pescatarian nation and in my biased opinion, produces the finest meat in the world. To say that the best kobeor wagyu beef does not redefine tenderness is no exaggeration. The finest marbled cuts dissolve in your mouth and hit the g-spot, the "g" standing for gustatory. Yes, the Japanese excel at all meats...except lamb. The Japanese don't really eat lamb. Don't ask me why. They just don't.

So where was I? Kids and vegetarianism - never the twain shall meet. From an early age, we drilled into my daughters' malleable membranes that vegetarianism would never be on the menu. The day a darling sprog petulantly shoves away a plate of bloody rump steak, folds their arms in a huff and protests it is wrong to kill animals, is the day we telephone Paul McCartney. They can go and live with the Fab vegan on Mull of Kintyre and eat carrots all day. Fortunately, this threat remains just that. My beloved daughters have already admitted that they could never become vegetarian, because: a) they are half-Japanese, b) their mother is a fine cook, and c) they have eaten the best.

With respect to c) and indeed the fact that they are a), when I flew to Tokyo last July, I resolved to investigate one of its finest yakiniki restaurants. "Yaki" means grill and "Niku" is meat. That should give you some idea, though here in the West it is often referred to as "Korean barbecue," since that is where it originated. Yakiniku takes the concept of a restaurant and obviates the skilled chef. You, my friend, are going do the cooking and they'll provide a grill carved into the middle of the table and a pair of tongs to help you along. Oh...and because there is no need for a chef to ponce about with his reduced sauces and fancy foam, they concentrate on one thing - giving you a plate of the finest meat to grill and the most exquisite sauces in which to dip them. 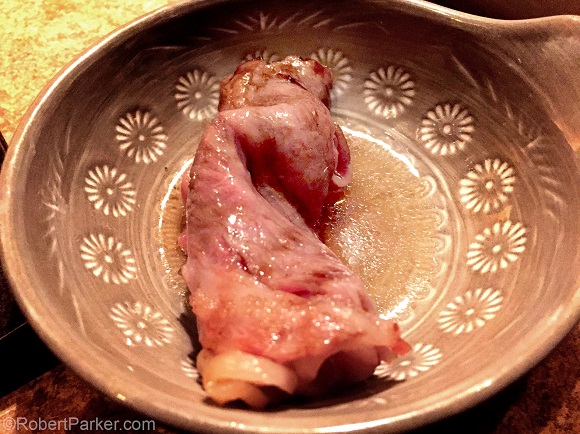 A top quality cut of Japanese meat tends to be ultra-tender, marbled and gossamer thin. Whereas we Brits and Americans are inclined to seal a thick wedge of sirloin in a hot iron pan, the slices here are thin enough for origami. That's just what we found at Cobau in deepest Ginza, not far from the Mitsukoshi store. Of course, in salubrious Ginza you can pay a lot of Yen if you insist on your cow being reared in the penthouse apartment of the Ritz before checking out to visit the local abattoir. There's no real need for this, to be quite honest. Cobau is admittedly not the cheapestyakiniku restaurant on the map. However, it is unquestionably fantastic value, especially given the favourable exchange rates at time of writing. To that end, it is probably cheaper than many of the restaurants reviewed here on Hedonist's Gazette.

Cobau would laugh at the pretension of self-aggrandising dishes presented in cosmopolitan cities in the West. This is cooking in its simplest, most direct, almost primeval form, and yet the complexity is revealed the moment it seduces the taste buds. This meal is as much about texture and umami as it is about aromas and flavours. As is customary, the restaurant is partitioned into private rooms with a single party in each, tables equipped with a bell to hail your waiter. I should mention here that they had menus printed in English if you do not have a Japanese wife and/or Google's amazing translate app that can be a Godsend in a city like Tokyo. 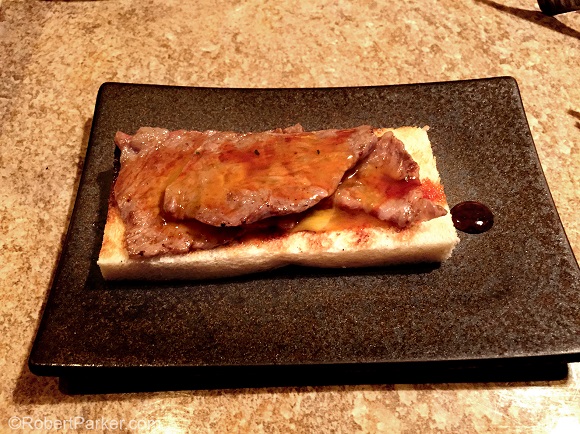 Given its culinary origins, we commenced with some delicious namul and kimchi. I love the former, Korean seasoned vegetables such as daikon, soybean sprouts and seaweed, but have always loathed the latter that I find too pungent for my taste buds. These were followed by broiled yukke. This is usually served raw, essentially steak tartar, though I didn't mind it being broiled since five people died and 35 were hospitalised after eating this dish in 2011. Fortunately, nobody died this evening. It was absolutely delicious, seasoned to perfection. We took a break from the meats with fresh seasonal salad and a palate-cleansing miso soup, with the traditional tofu and seaweed flavorings.

The main event was the five-way exploration of black wagyu beef from different parts of those famous cows that enjoy a mollycoddled life out on the Japanese mountains. Each one made your taste buds burst with delight: unbelievably tender so that you slowed down masticating to prolong the flavour. We finished with some sukiyaki, essentially meat, tofu, vegetables and noodles all lightly boiled in an iron hotpot, served with koshihikari rice. 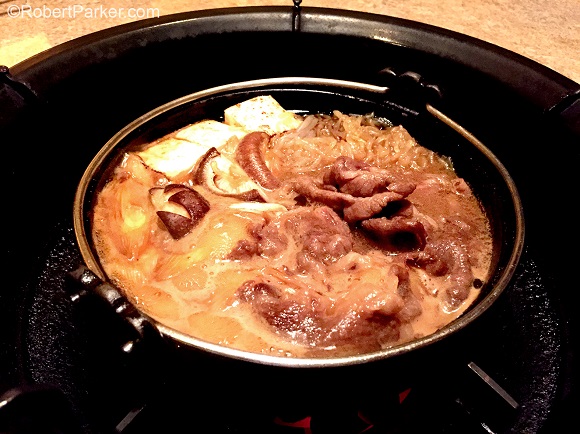 It all sounds straightforward. However, there is an art in simplicity, which is a cornerstone of Japanese cuisine. It tends to be Western restaurants that try and "jazz it up" so that they can charge a small fortune. I departed the restaurant with my senses satiated and frankly, I could have nipped back inside and done it all again. Perhaps the one weak point is on the drink front, for the stark reason that nothing suits this cuisine more than a chilled dai joki of Asahi Super Dry beer, especially when outside it is around 37 degrees Celsuis and 99% humidity. However, I did martyr aChâteau Figeac 2009 for the occasion, which is tantamount to infanticide, yet such is that vintage's lushness and precocity, nobody complained. As we walked back to the Ginza metro with the kids, still licking their lips after the feast, I imagined a dystopian world where my offspring shunned meat and became vegetarian. Instead of Cobau I would have to make do with...I dunno...a night of tofu 'n turnips. With Paul McCartney. Post Cobau, that is now impossible.