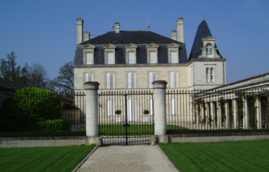 Usually I dine at the Saint Julien restaurant during en primeur, but since the lecherous chef put us off our canard last year, the B.I. boys elected to spend the evening at a château and since that château was Grand-Puy Lacoste, I invited myself along. I will not say too much except that Xavier Borie’s wines showed brilliantly that evening, in particular one of the best 1990 Pauillac’s money can buy and yet another gorgeous 1985, the fleshiness and voluptuousness of the vintage counterbalancing the austerity with aplomb. Wines like Château Grand-Puy-Lacoste 1985 beg the question: why buy a First Growth?

“Because I made shit loads of money on them,”

I hear you reply.

By the way, the Château Grand-Puy-Lacsote 1945 was a sturdy wartime veteran, one bottle completely corked, the other with a faint taint, although I would suggest that if you can find them, the ’59 or ’61 is better. Still a privilege to taste an extremely rare wine.

2003 Château Haut-Batailley 88
Tasted with Xavier Borie at Grand Puy Lacoste, this has a dark garnet hue. The nose is very perfumed with layers of very ripe black fruits: raisin, black olives and a touch of fig. Full-bodied palate, lovely ripe cherry fruit, fleshy erring towards jammy towards the finish, hence my parsimonious score. Drink over the next five years. Tasted April 2008.

1998 Château Grand-Puy-Lacoste 90
Tasted at the château, this has a ripe, almost sorbet-like nose with floral overtones, violets and rose petals complementing the succulent strawberries, loganberry and red cherries. The palate is fleshy, seems to be more Merlot-dominated at present, but certainly full-bodied, with great depth for the vintage. Ripe, saturated tannins towards the finish that is bursting full of bright black cherries and briary. Great length. A lovely ’98 that still needs another 3-5 years before becoming approachable. Tasted April 2008.

1990 Château Grand-Puy-Lacoste 95
Tasted at the château, this has a deep garnet core. The nose is very tight at first, over-shadowed by the more ebullient ’98 at first although it begins to unfurl with aeration and evolves some lovely ripe blackberry, cedar, briary and iodine tinged fruits, the bouquet eschewing any hot summer fruit characteristics. The palate is full-bodied with a firm tannic structure matched by its admirable fruit concentration and its acidity that lends it so much freshness and vitality. Great weight, this reminds me of the awesome ’82 that is now only just beginning to drink. Blackberry, raspberry and just a touch of savoury fruit on the long, masculine finish. An outstanding ’90, but for those with patience, this will be a Pauillac to treasure for the next 20 years. Tasted April 2008.

1985 Château Grand-Puy-Lacoste 92
Tasted at the château, you are immediately struck by the smokiness of the nose: cooked meats, a touch of burnt buttered toast just explodes from the glass. The palate is full-bodied with an over-riding meatiness to it, lovely balance, fleshy as one expects from an ’85, but married to Grand-Puy-Lacoste’s inherent austerity this makes for a “complete” wine experience. Savoury black fruits on the well-poised finish that just lacks the length of the ’90. But still a lovely wine. Tasted April 2008.

1945 Château Grand-Puy-Lacoste 88
Tasted at the château but not from their cellars. Two bottles, one completely corked and the other with a little scalping on the nose but not perceptible on the palate. It has a striking dark colour, the nose bereft of fruit concentration but offering touches of dried blood, dried orange peel, dusty antique shop and struck match. For some reason it has more of a Saint Julien character rather than Pauillac. The palate is medium- to full-bodied, very youthful and vibrant with great depth on the mid-palate. Conservative, foursquare as one would expect and I would say, without the breeding of the ’59 or ’61 (indeed more like Grand-Puy-Lacoste ’66.) But the finish does have a degree of austere elegance about it with cedar, graphite and tobacco note, though it is linear in style rather than fanning out at its denouement. A stately ’45 that would benefit from a little more joie-de-vivre. Drink now. Tasted April 2008.