Forgive the alliteration, but February is in fact a foodie month in Florence. The coldest month of the year is one of the hottest in the Tuscan kitchen. February is when the main wine appellations including Chianti Classico, Vernaccia di San Gimignano, Vino Nobile di Montepulciano and Brunello di Montalcino present their newest vintages to the public and press. Many of the tasting festivities are staged in the city of Florence, with its stunning Renaissance cityscape as a panoramic backdrop. Restaurants and chefs draw up special menus based on local winter ingredients in an effort to pair those vinous releases. February is when Tuscany celebrates its creative gustatory abundance for the benefit of the world’s most discriminating palates.
And, sadly, I am almost never among them.
Scheduling and the Wine Advocate publishing program make it impossible for me to attend the exhausting weeklong Anteprime Toscana tastings. I have not been able to do so in many years as the event falls precisely on my deadline for my Brunello di Montalcino report. This year, however, one small satellite tasting outside the official schedule caught my eye and inspired me to pop up to Florence for the day by train. The occasion was the unveiling of the newest vintages of Chianti Classico’s Montevertine and Monteraponi followed by a lunch prepared by chef Vito Mollica who is one of the undisputed leaders of Florence’s modern food identity. He is executive chef at Il Palagio, the headline restaurant inside the Four Seasons Hotel Firenze. All the wines selected for the meal exclusively represented the remarkable 2006 vintage that is currently enjoying a most spectacular moment in its promising drinking window. I joined an oversized table set for 20 or so guests including many familiar faces in wine journalism. It was delightful to reconnect with friends I had not seen in a number of years.
Seated in one of the restaurant’s back rooms with gilded mirrors and Tuscan landscape paintings affixed to cream-colored walls, our convivial lunch started off with porro arrostito con Parmentier di patate e tartufo nero pregiato (roasted leek with potato cream sauce and black truffle). We were off to a spectacular start in what would become an absolutely memorable succession of carefully considered dishes paired to Sangiovese-based wines from the excellent 2006 vintage.
I had no idea that a simple leek could produce such refined flavors. My own experience with the vegetable relegated it exclusively to a decidedly unglamorous supporting or background role, much in the same way you use chopped onion to favor a sauce or stew. I had never considered the leek worthy of a headline role on any plate. This would be one of many gustatory discoveries made at Il Palagio. The leek was overcooked to the point of being soft and buttery on the inside. It cut straight through with a dull knife. The only textural crack or crunch offered by the dish came from the razor-thin truffle sliced saddled on top. The flavors pitted sweet against earthy and those taste parameters are perfectly aligned with aged Sangiovese-based wines. We sipped two excellent wines with this dish: The Monteraponi 2006 Chianti Classico and the Montevertine 2006 Pian del Ciampolo. Both wines represent entry-level releases from these neighboring estates. They showcased the elegant and fine aging trajectory I associate with the slightly cool, and therefore more acidic, 2006 vintage.
Michele Braganti’s Monteraponi and Martino Manetti’s Montevertine are both located in the Radda in Chianti sub-zone of Chianti Classico in central Tuscany. If you leave Radda at your back and head towards Castello d’Abola, you will find both estates. Monteraponi is located on the right side of the shallow valley and Montevertine is to your left. The lion’s share of vineyards belonging to both estates sits on the left side of the road (under Castello d’Albola) where the grapes enjoy excellent exposure to the sun. Radda is known for its high altitude vineyards and its slightly cooler growing conditions. Both estates prioritize elegance over power. Sangiovese from this sub-zone tends to be more Burgundian in personality as opposed to Bordolaise.
One of the sous chefs emerged from the kitchen holding a tray topped with six pig bladders that had each been expertly stuffed with an entire pigeon. We admired the tray for a few moments before it was hastily carted back to the kitchen to go into the oven.
The next dish served was the beautifully presented risotto alla zucca e civet di lepre (pumpkin risotto with a wild hare reduction sauce). Again, the theme of the dish saw a contrast between sweet and savory, but with more intensity in this case. The bright orange pumpkin showed perfect ripeness with honeyed flavors that wrapped thickly over each kernel of thick Arborio rice. The rabbit sauce, with its overtly salty and gamey nuances, was served in a lump in the middle of the dish. You could use your fork to whirl those contrasting flavors as you pleased.
We continued with the two middle-range wines from each winery. The Monteraponi 2006 Chianti Classico Riserva Il Campitello was more structured and concentrated of the two. It made a better partner to the gamey rabbit component. The Montevertine 2006 Montevertine, on the other hand, was more finessed and streamlined. It showed a more prominent vein of natural acidity that cut straight though the creamy or unctuous nature of the pumpkin risotto. To my mind, the food and wine pairing achieved perfect balance with this risotto dish. The dish rose above the complications of having two wines served with it simultaneously. 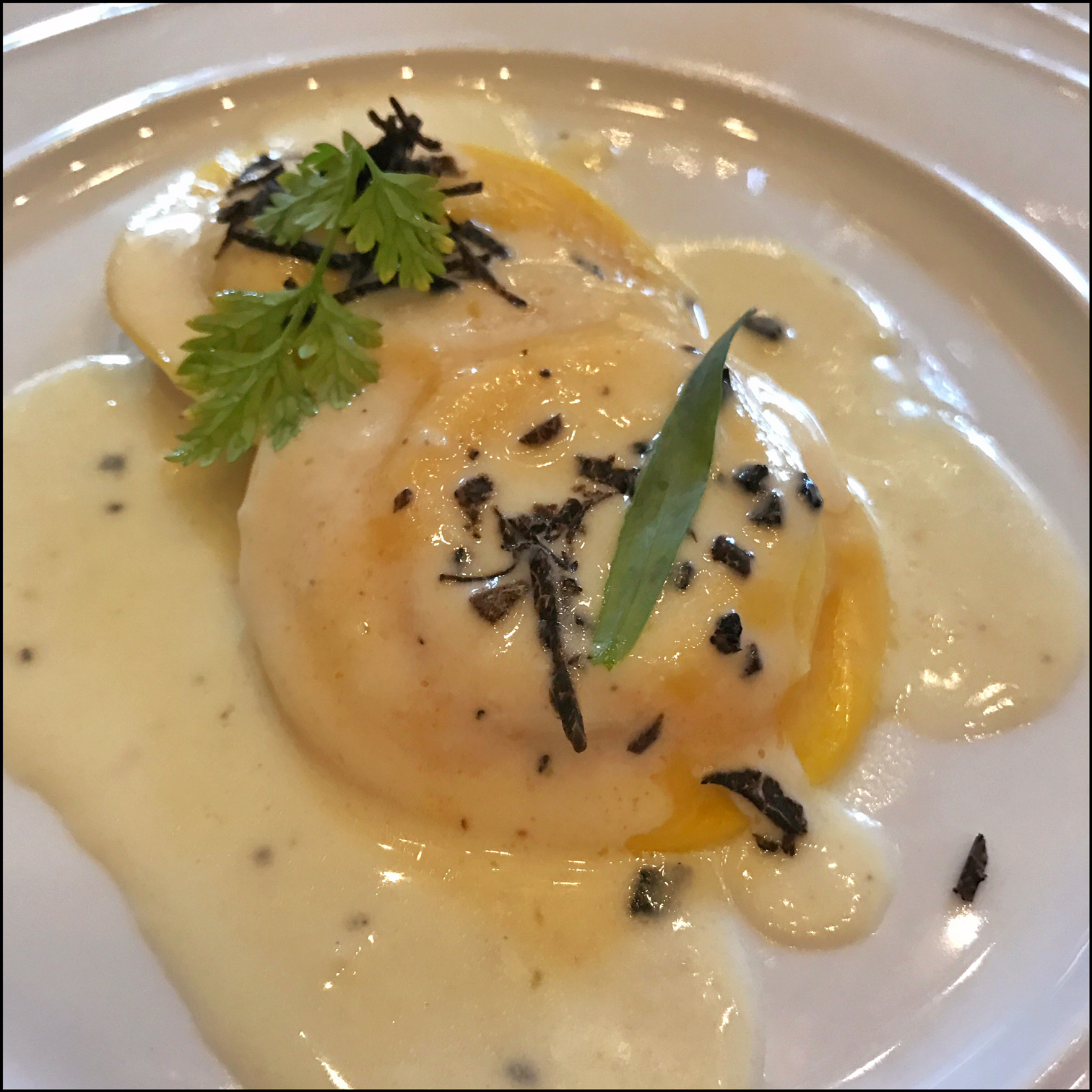 We continued to enjoy all four wines with the amuse bouche served next. Thankfully, each table setting was prepared with enough stemware to allow us to go back and revisit all the wines poured. Il Palagio produced one of the most sophisticated, and rich palate-cleansers I have yet to encounter. It consisted of delicious little circular ravioli stuffed with a fresh ricotta and topped with a cream and truffle sauce.

Perfectly timed on the heels of that intermediary course, we were treated next to the culinary protagonist of the day: piccione in vescica con crema di mele cotogne (pigeon cooked inside a bladder with a cream of poached quince fruit). The bladder acts like a savory little crockpot that captures the juices from both types of meat. It also ensures that the pigeon reaches a sublime level of succulence and overall tenderness. That textural coarseness that you normally get with pigeon meat had literally been melted down to form morsels of carnal silkiness and opulence.
The two headline wines were served to everyone’s excited anticipation. The Monteraponi 2006 Chianti Classico Riserva Baron’Ugo has aged gracefully, becoming more silky and fine all the while. Like the other dishes we enjoyed at Il Palagio, this course offered marked juxtapositions against the salty and gamey flavors of the meat against the openly sweet flavors of the cooked quince. Both sides of this culinary spectrum reached impeccable balance and harmony thanks to this delicate wine. Licorice and pressed rose added to the flavor complexity of the dish. The same can be said of the sublime Montevertine 2006 Le Pergole Torte. However, in this case the nuanced complexity of the wine stood above the dish before us. It did not play a supporting role to the food. Instead, I would describe the 2006 Montevertine as a co-protagonist. 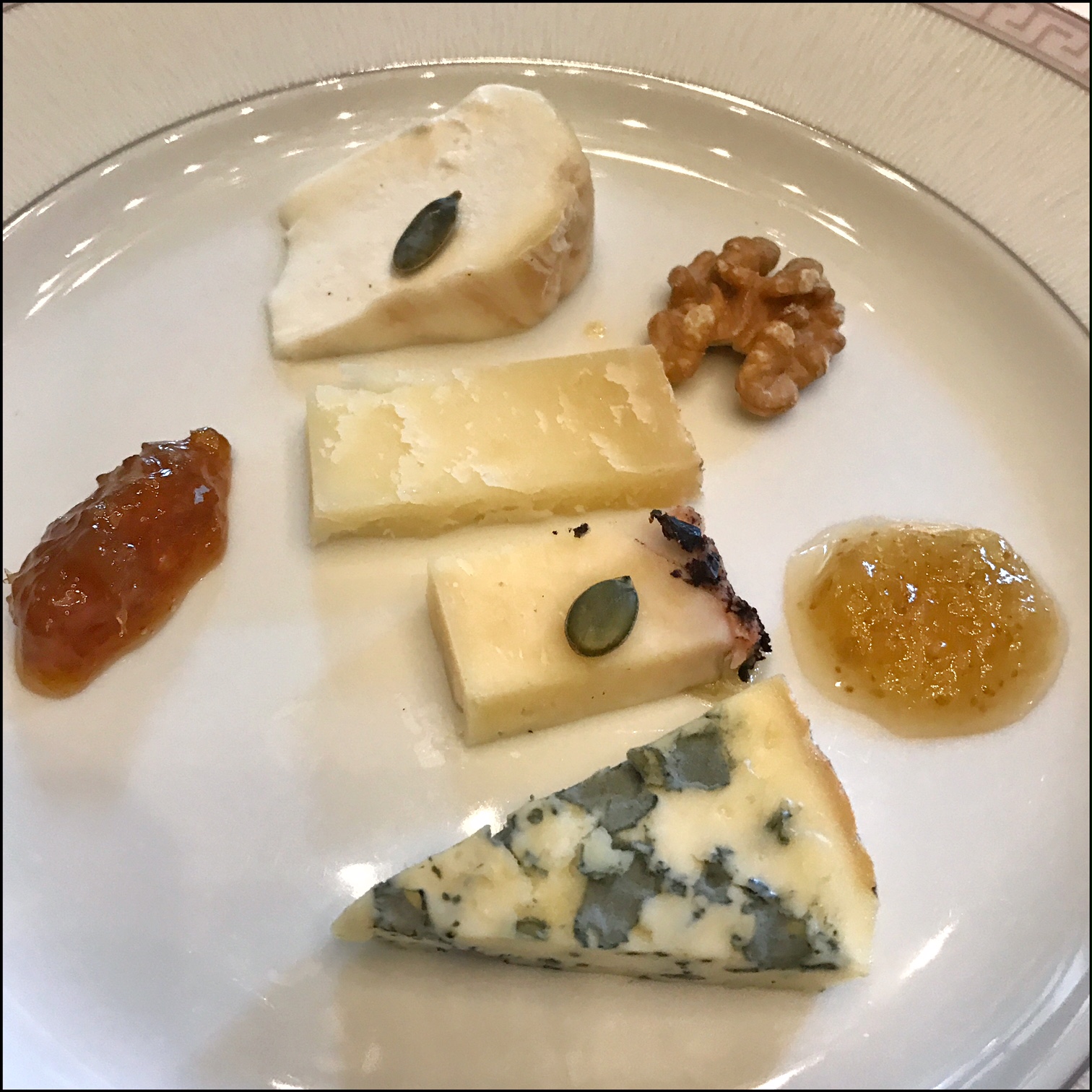 Our fantastic meal came to a conclusion with a plate of assorted Italian and Tuscan cheeses with accompanying fruit-based jellies. A dessert completed the experience. This was the barretta al caramello e gelato alle nocciole (caramel bar with hazelnut ice cream). I need to assume that the quality of hazelnut used was the tonda gentile del piemonte (a cultivar native to Italy’s Langhe region in the North). The grandiose flavors of the gelato transported us, momentarily, away from Tuscany to Piedmont. This last course was served with the syrupy Monteraponi 2006 Vin Santo del Chianti Classico. This wine showed a dark amber color and the subdued sweetness that made it perfect to sip either with the pungent flavors of the cheeses or the nuttiness of the dessert. 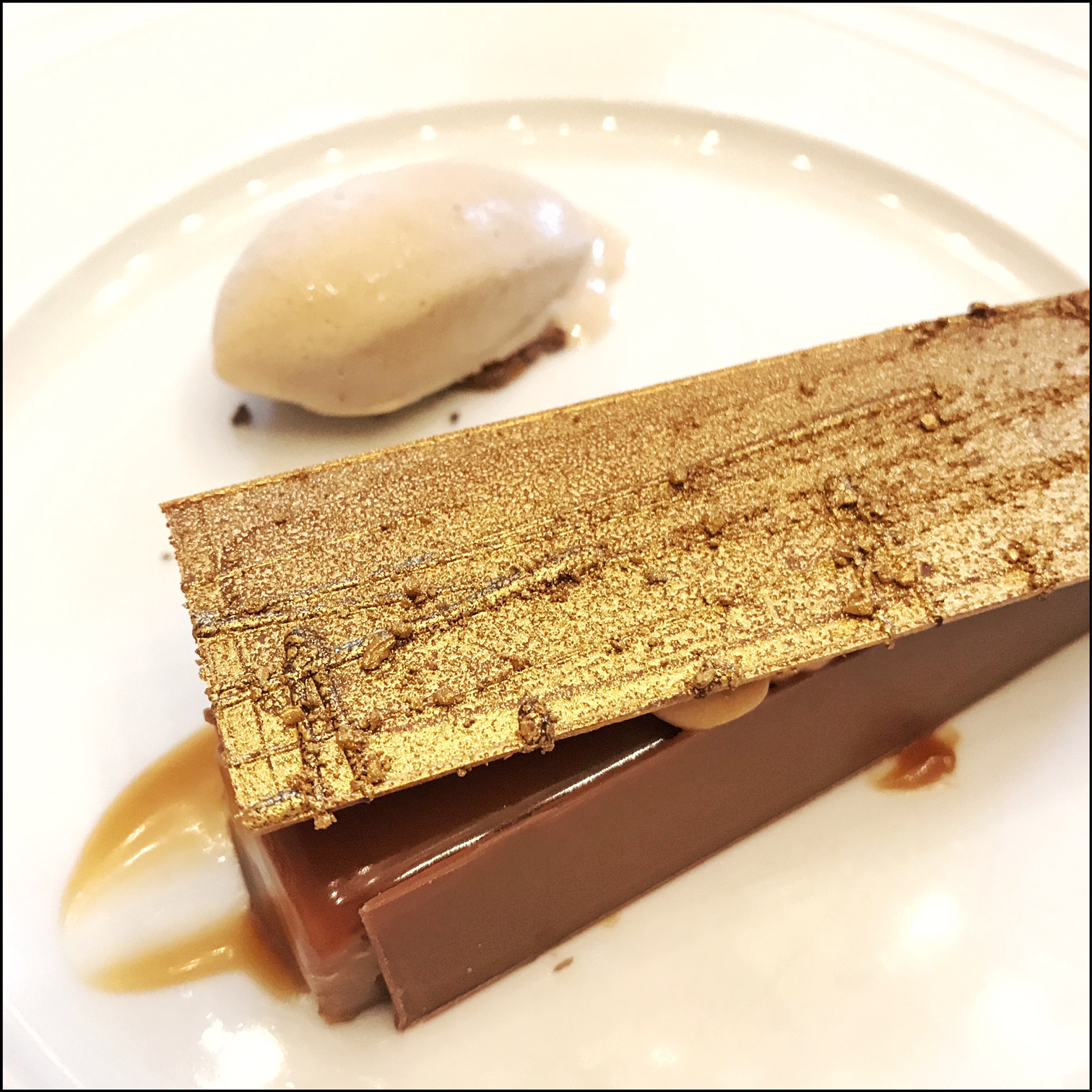 Thank you to both Michele Braganti and Martino Manetti for presenting their wines in the context of such an exhaustive gustatory experience.