Have you ever looked through a telescope? Everyone should do it once in their life. No need to build an observatory in your attic and turn your semi-detached into Jodrell Bank. You simply require a telescope that can be lifted out into the back garden on a clear and cloudless night. I started using mine recently and naturally my first act was to aim at the largest celestial object: the moon. Even my entry-level "Skywatcher" picks out lunar craters, mountains and Maya from Space: 1999. That first close-up observation (of the moon, not Maya) makes you feel like a voyeur, peering at something beyond the atmosphere at first seems somehow...illicit. It's as if you chanced upon a peephole into the cosmos. Then there is a flutter of excitement as it confirms beyond all doubt that you and I are just specks on a rock hurtling through an infinite void. The only thing you cannot see is the dark side of the moon. That is reserved for members of Pink Floyd. 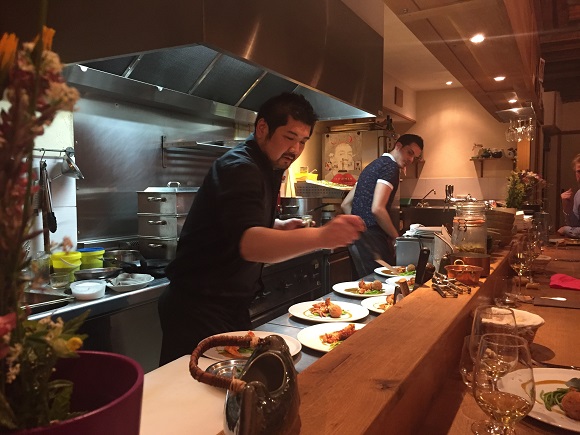 It was while I was moon-gazing that I thought about one of my go-to restaurants in Burgundy - La Lune. Fortunately, La Lune does not orbit the earth 384,000 kilometers away, but is located in the heart of Beaune opposite the famous Le Cep hotel. My first venture there was in 2014 after an arduous day on the front line visiting growers, not long after it opened its doors that May. My interest had been piqued by rumors of its Japanese chef, admittedly not a novelty in Beaune, a town with a long association with the country and already home to Japanese restaurants such as Bissou and Sushi-Kai. My own connection with Japan and its cuisine is deep, having both inhabited and married into the country. Perhaps because of that, my hopes were "contained." I am finicky about Japanese cooking and moreover I have enjoyed countless astonishing meals that cost the equivalent of a KFC. As I have written in previous Hedonist's Gazettes, the genius of Japanese cuisine does not reside in its most exclusive or expensive restaurants. It lies within the countless self-effacing common or garden eateries that occupy every nook and cranny, where ingredients and attention to detail border on the obsessive. So price is a moot point - it takes a lot to impress me.

Things I remember about my first meal at La Lune: 1) It was tiny - just one comptoir for around just over a dozen people and two small tables by the window; 2) There were only two employees, the friendly but taciturn bearded Japanese chef cooking everything to order in front of his audience and a sharply-shaven Frenchman serving the dishes and taking orders; 3) The tapas-style dishes were cheap with several under ten Euros; 4) The kariage chicken was the best I had ever eaten outside of Japan and made me lachrymose with pleasure; 5) Everything was mouth-wateringly delicious; 6) The wine list was not much kop, but I did not care; and 7) I could not wait to return. 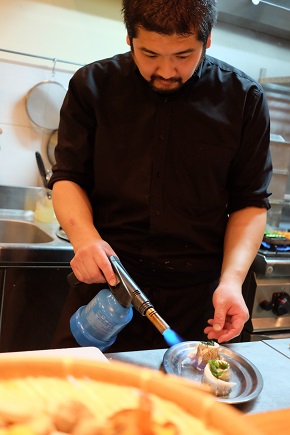 And return I have done, a dozen or so times. Seiichi Hirobe, who previously worked at Sushikai on the Route de Dijon, is like all Japanese chefs: reticent and diligent and talented. He's like a character you might meet in the middle of a Murakami novel. He goes about his work piecing dishes together with the meticulous attention to detail that is bred into the Japanese psyche. Julien Martin (no relation) is the young gentleman taking orders and giving Seiichi a hand when necessary. I have never observed anyone else joining this duo and never witnessed a moment where additional hands are needed. Don't come here if you expect plates to appear with a rude snap of your impatient finger. They are served when Seiichi is happy and that can sometimes take time, although patrons seem fully aware and appreciative of their modus operandi. The only thing that has changed is its popularity, which has soared via word of mouth and mea culpa, I have persuaded most of my friends to eat there, and raved about it in this very publication. You have to book well in advance nowadays, although one of La Lune's quirky virtues was that you can nip in late and order a couple of dishes when earlier diners vacate their stools. 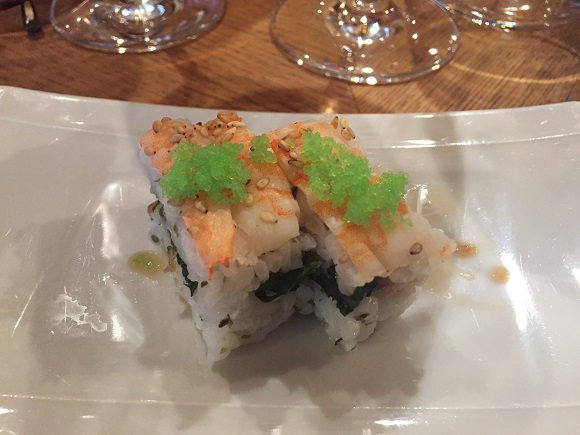 My last visit there was in May of this year, during the Burgfest tasting of white 2013s, which will be published later this year. Our party was sufficiently large (i.e. double figures) for us to hire the entire place and a special set menu was arranged. We started as is customary with bowls of edamame, perfectly salted with just the right texture. It is easy to make ordinary edamame, tricky to get the type that keeps you stuffing more and more into your moth. This was followed by oshi zushi de thon et chevettes: tuna and prawns interlayered with perfectly sticky rice topped with pine nuts and green roe. I should have inquired about this unusually colored roe. I assume this is tobiko (flying fish roe) that is naturally red-orange in appearance, so it might have been dyed with wasabi? My favorite dish of the entire evening was the Carpaccio of turbot served with enoki mushrooms, foie de monkfish, vinaigrette of yuzu-miso. This is one of the La Lune dishes that melds ingredients together to devastating effect, in particular the yuzu-miso that matched the turbot to perfection. What I love about this dish is the multi-layering of flavors, coercing you to masticate for as long as possible as each one rises to the surface. 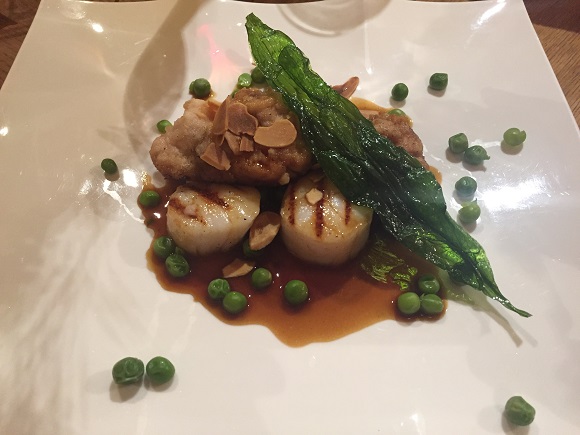 The pan-fried half lobster came with wild asparagus, croquettes of rice, crab and cheese, lobster sauce and miso-sugar. Call me a heathen, but I regard lobster as a bit overrated. I have rarely had a lobster dish that forms the highlight of a dinner. Lobster is a bit like the First Growth of crustaceans and comes loaded with expectation. Perhaps every lobster dish that I have eaten comes from an off vintage? The next course was drop-dead gorgeous: three perfectly seared grilled scallops paddling in meat stock, crowned by melt-in-your mouth, deep-fried sweetbread. This was heavenly, the sweetbread gently disintegrating in your mouth and flooding the senses with guilty-ridden deliciousness. It warmed us up nicely for the star course - Wagyu beef, grilled vegetables and turnip with ponzu (a citrus-based Japanese soy sauce). The Wagyu was excellent, if not the absolute best I have eaten, and perhaps I might criticize its coterie of vegetables that did not quite marry with the beef as I might have hoped. We finished with chocolate gateau with créme caramel, a pudding that I cannot leave La Lune without devouring. It is absolutely stunning.

By the tenor of this review, you might gauge that this might not be my gustatory apex chez La Lune. There were a couple of dishes that did not quite leave me grasping for superlatives, something I often find when a restaurant sticks up a "Private Party" sign on the front door. On the other hand, I should stress that I have eaten at La Lune many times and departed savoring amazing dishes. I've included a couple of images from previous visits, including above: a memorable trio of rice croquette and a twirl of sea bass that was ceremoniously blowtorched right before serving, as well as a revivifying octopus salad with grilled mushrooms served with vinaigrette and miso.

As I mentioned in my introduction, the one weak point - not only with respect to La Lune but practically every restaurant in Beaune - is the limited wine list. It lives within its means. Such is the increase in wine prices that ironically the first to suffer are restaurants on its doorstep. The wine list is not terrible by a long shot and I have made some decent discoveries of less well-known growers. But if you were starting up a restaurant, would you spend your entire cash flow on a stash of Rousseau or Roumier, presuming you could source them? No, and that is a great pity and a loss to the Beaune restaurant scene. Since we had La Lune to ourselves, the wines were proffered by some of my esteemed friends with gifted palates and it had been decided to drink anything but Burgundy, since we had been marinating in Chardonnay for the entire week. 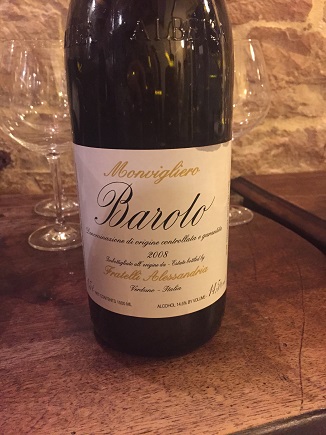 So we started in Lombardy with the 2012 Sfacciata from Castello di Luzzano, a sweet Malvasia offset with a little pétillance and a perfect and ingenious way to start. We stayed in Italy, but moved to Piedmont with an outstanding magnum of 2008 Barolo Monvigliero fromFratelli Alessandria that was aptly quite Pinot Noir in style, given that we were drinking it in the heart of Burgundy. I love the 2008 vintage in Piedmont and the wines seem to give so much in their youth. We finished in Wachau with a 2007 Wunderburg Grüner Veltliner from Pichler-Krutzler, the joint venture between husband and wife team Erich Krutzler and Elisabeth Pichler, daughter of the famous winemaker F.X. Pichler. I believe this was the first vintage of their new venture and it was drinking beautifully, razor-sharp acidity and loaded with honeydew melon, kumquat and nectarine on the almost viscous palate.

La Lune remains an example of how French and Japanese cuisine can knit so harmoniously. The restaurant's shoebox size lends it an intimacy that puts you right in Seichi's shoes and I have spent evenings at the counter alone, engrossed in the chef's skill, wishing that I was so dexterous with a knife and nimble with fingers. It's that intensity of cooking that Japanese chefs possess. La Lune is one of my compulsory visits whenever I stay in Beaune and in my opinion, it is the best in town.

One hopes that Seiichi knows how to relax...perhaps I should lend him my telescope for a bit of moon-gazing?