How many meals do you remember in full Technicolor detail one year after the fact? If I consider the dozens of tastings trips I made in 2016, the hundreds of delicious restaurant meals served before me and the thousands of miles I drove to explore the far extremities of the Italian peninsula, I recall only one meal as if it were yesterday. I remember it with such startling clarity it evokes a physical reaction of hunger and desire even today.
That special meal was a July 2016 lunch at the Masseria Barbera in Puglia. My host was restaurant owner Riccardo Barbera and my dining companion Tormaresca general manager Peppino Palumbo, a vintner I have affectionately dubbed “Mr. Puglia” in past articles. He knows every nook and cranny of this largely unexplored part of southern Italy. I would like to thank both men: Riccardo for his deft hand in the kitchen and Peppino for his captivating Puglia storytelling that gave voice and background to each dish served.
As I was completing research for my wines of Puglia article last year, I invited Peppino to lunch and suggested a nearby restaurant that had long been on my wish list. He gently indicated that he had a different recommendation instead. As we drove up the long driveway to Masseria Barbera, I instantly recognized that I had been there some 15 years prior—I had enjoyed an unforgettable meal at the same farmhouse in a nebulous past life. But I had no way of working back in time to remember the name of this magical place or even its precise location. I was overjoyed to recognize the whitewashed main house covered in climbing roses and ancient, twisted vines of wisteria. The glazed pottery, the copper pots and the tomatoes drying overhead instantly triggered my memory. It felt like a well-deserved homecoming.
The idea was to meet for a quick lunch, but Puglia never moves with a fast pace when it comes to a savory meal. It unfolds slowly, over a large portion of the day, with the grace, crescendo and momentum of a ballet or three-act theatre performance. To whet our appetites, Riccardo served local olives with the non-vintage D’Araprí Metodo Classico Pas Dosé. He also served a plate of pizza di cipolla (onion pizza) that was delicately creamy on the inside.

The landscape in Puglia is dotted with ancient olive trees that span an infinite horizon. We started our feast with two types of olive cultivars: Bella di Cergniola and Baresane. The green olives are cured in simple salt water and are succulent and sweet inside. The onion pizza is sometimes called a calzone (or big sock) because the filling is stuffed inside a dough envelope. The non-yeasted dough is dense and flat in texture and you can taste the pungent olive oil kneaded within. The filling is made with a local leek called sponzale. It is cooked in olive oil and white wine. White seedless grapes called uvetta sultanina are mixed inside to offer contrasting pockets of sweetness.

Puglia is a forceful proponent of antipasto culture. Sometimes, two thirds of a meal is considered part of the appetizer. Masseria Barbera cooks up a delightful sequence of antipasto dishes that appear according to Riccardo’s whim and whatever seasonal ingredients are available. Very few of these items are listed on the menu. If you come, I absolutely endorse the colorful succession of dishes that fall under the il nostro benvenuto–la degustazione degli antipasti della Masseria heading on the menu.
We were next treated to the delightful zeppolà di baccalà mantecato con patata con salsa di carrote Pogliano al Mare. This zeppolà—a fried dough fritter—was made with potato and codfish. The orange-colored sauce was a purée of multi-colored carrots (red, orange and purple) that come from the seaside town of Pogliano al Mare. We were served a second sparkling wine with a bit more structure. This was the non-vintage Monsupello Metodo Classico Pinot Nero Pas Dosé Nature.

An elegant cheese plate followed next. On the left of the photo you see here is a Pecorino fresco (sheep’s milk) that was aged for 40 days. The insides were soft and tender. On the right, we were treated to ricottina fresca, a cheese that is delicious but very difficult to procure. You normally don’t think of cheese as a seasonal food, but ricotta is the exception. The cheese tastes best in late summer when the hillsides are still alive but the grass has less moisture. The favor intensity of the milk is at its most concentrated. Riccardo explained this was the last ricottina he would serve that year. It represented a blend of 80 percent sheep’s milk (pecora) and 20 percent goat’s milk (capra). The cheese is so fresh it must be consumed within a few hours of production. Two jams were included: the first made with bitter cherries and the second with oranges and tangerines. 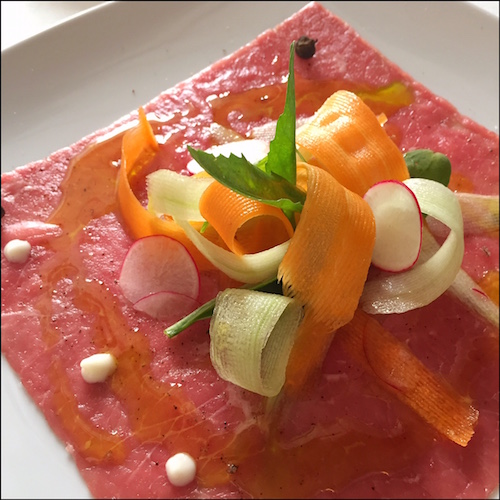 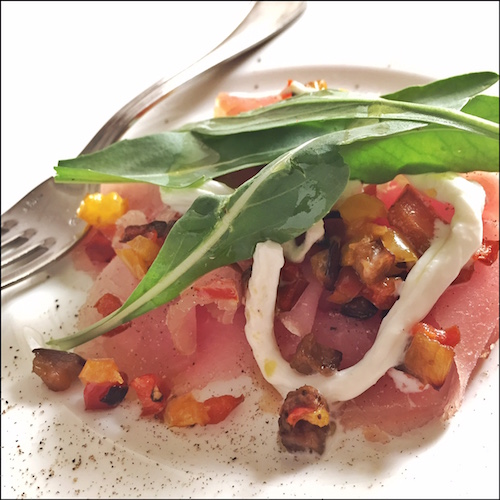 The next dish in our never-ending parade of antipasti was the lonzo di maiale affumicato con burrata di Andria, rucola e verdure croccante, a smoked pork loin with burrata cheese from Andria, rucola leaves and crunchy vegetables. This was a complicated dish with many contrasting flavors and textures. The delicate pork loin was marinated and smoked to reveal a pale pink color that could be mistaken for salmon. Those tender slices of meat were topped with a milky thread of burrata cheese and garden vegetables (red and yellow pepper, zucchini and eggplant) that were diced into tiny cubes.

We were then served a generous plate of local cold cuts. The platter contained three delicacies. This trio included a soppressata from Lucania (another name for the neighboring region of Basilicata), pancetta (bacon) and cappocollo (another pork cold cut). The latter two were sourced from an artisanal butcher in Martina Franca, a whitewashed village in Puglia’s Valle d’Itria.
One of my absolute favorite dishes was the filetto di baccalà con gaspachio di friggitelli, pomodoro fritto e peperone Crusco (codfish fillet with a sweet green chili gazpacho, fried tomato and dried Crusco peppers). The dish combines the super soft and tender streamed codfish with the green flavors of the friggitelli peppers. You also get texture and crunch from the fried basil leaf served as garnish and the Crusco pepper flakes. These are sweet red peppers that are dried in the sun and salted. Peperone Crusco is a traditional ingredient borrowed from neighboring Basilicata.
Even the table bread at Masseria Barbera is worth special mention. Our basket contained whole wheat bread embedded with olives, a durum flour bread called pane altremia and simple dough rings, or taralli, that are a culinary symbol of Puglia. 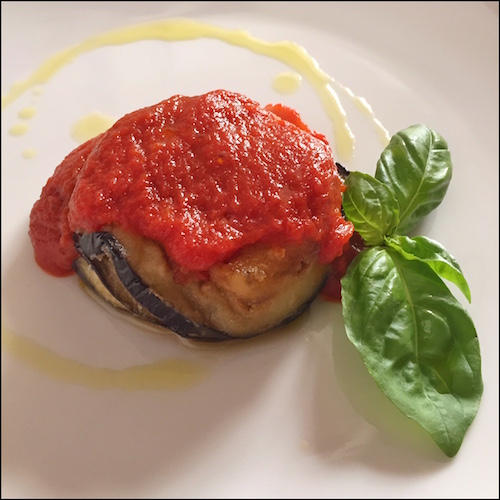 Our very last appetizer was served—the delightful millefoglia di Parmigiano. This dish follows a classic recipe in which thinly sliced eggplant is fried and then layered with tomato concentrate. The sauce is made once a year when the tomatoes are sweetest and most flavorful. With this dish, it was time to open our first red wine. I selected the 2010 Torrevento Castel del Monte Riserva Vigna Pedale, a locally made expression of the Nero di Troia grape. The wine offers loads of bright primary fruit with blackberry and cassis backed by licorice and cola. 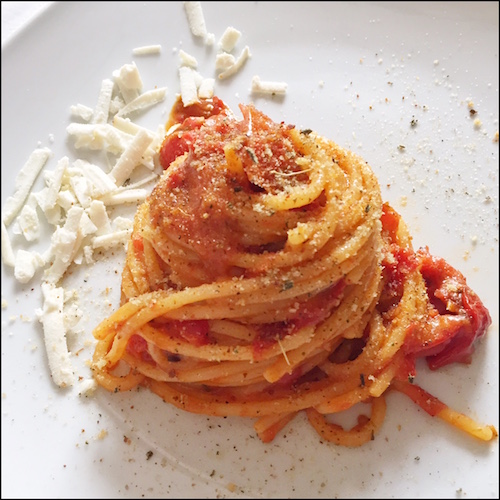 Not able to choose one pasta dish to share, Riccardo brought us two dishes instead. The first was the spaghetti campagnola con pomodorino al forno, pan dei poveri e ricotta duro (country-style spaghetti with oven-roasted cherry tomatoes, poor man’s bread and salty ricotta. My favorite part of the dish was the so-called pan dei poveri. This consisted of baked breadcrumbs sprinkled over a pasta dish in the absence of the more expensive Parmigiano or Pecorino cheese alternatives. In an effort to safeguard local traditions, you often see breadcrumbs sprinkled over pasta dishes in authentic Southern Italian cooking. It’s something I have even brought to my own kitchen. You baked the breadcrumbs in the oven with laurel leaves and olive oil. They maintain their crunchy flavor when topped over pasta as a poor man’s Parmigiano.
Our second pasta dish borrowed some of the most popular ingredients in local cuisine. The maritato di cavatelli e orecchiette di farina di Grossetto con cime di cucuzze, cacio ricotta e pomodorino finally brought us the ear-shaped pasta (orecchiette) that Puglia has exported around the world. This dish saw two types of pasta mixed together: orecchiete and cavatelli made with artisanal semolina and whole wheat flours. The pasta was cooked in a sauce of zucchini stems (cime di cucuzze), grated cacio ricotta cheese and cherry tomatoes.
I had never eaten donkey meat, but I was presented with my first opportunity to do so with the filetto di asino sul letto di fagolini e patate al forno, donkey fillet on a bed of green beans with roasted potatoes. To be honest, I’m not sure I would be able to distinguish the donkey meat from a cut of prime steak—an extremely tender cut at that. The meat was absolutely sweet and succulent. It made a perfect pairing partner to our last wine of the day, the 2009 Rivera Castel del Monte Riserva Il Falcone, a structured and dark red wine that represents a 70-30 blend of Nero di Troia and Montepulciano.
Riccardo would not let us leave without trying his celebrated desserts. To cleanse our palates, he provided us with a few sliced of chilled watermelon or anguria. I would have stopped there but soon enough three little desserts appeared before us. These were the sporcomuso di Bari, the crostatina frolla con crema amarena and our host’s signature dish, the babà di Riccardo.  Sporcomuso means “dirty your face” and that’s exactly what happens when you get the powdered sugar all over your face and clothing. The little tart was made with a cream and black cherry filling and the babà was filled with rum.