Song Of the Month
Once in a blue moon* you hear a song that cuts you to the marrow. It tears your soul asunder. It threatens to leave you feeling distraught, dragging you into its inner turmoil, party to the artist’s suffering. Listen and life hangs suspended. Afterwards, nothing seems quite the same. These songs vary from person to person and of course, more often than not, they are inextricably linked with the individual's circumstances. Then on rare occasions, merely the song itself contains the power to elicit emotions from deep within, affirming music as that most potent of art forms.

When I heard Nick Cave's "Distant Sky" for the first time, I must confess that I felt devastated. I just stared into nothingness for a couple of minutes. That reaction seems immoral considering the suffering that Cave endured, completing his album after his 15-year-old son’s fatal accident. Such a tragedy is unimaginable. I am sure any parent, upon hearing news of a missing child or infant fatality, has momentarily dwelled upon what life would be after a loss of a child, then shut the thought out as quickly as possible. Nick Cave coped by channeling his grieving into his music and the result is Skeleton Tree, yet another wonderful album to add his formidable work. However, it is "Distant Sky" that continues to prick my soul and leaves me reeling with its impact. Apart from its disarming hymnal beauty, its the way his voice almost cracks in the opening lines and then, when it seems he cannot take it any more, passes the baton to Danish singer Else Torp whose voice sounds almost like a lullaby, like a mother soothing her upset child. I feel guilty listening to "Distant Sky," like a voyeur poking my nose into someone's turmoil. “They told us our gods would outlive us,” Cave sings, “but they lied.”

Those words, so totally crushing.

In a recent interview I read that the redoubtable singer had decided to be happy and that he intends to stick two fingers up at the circumstantial enforcement of sadness. Few could have such resolve. Then again, there is only one Nick Cave. “Distant Sky” is my song of the month and you need to listen to it and remember how precious life is because you can turn round and find it gone. 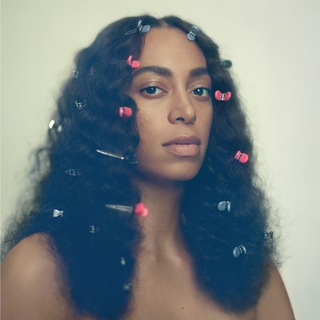 Album Of the Month
There were several contenders for this month's turntable candy. However, there is one stone-cold classic album. It may well turn out to be my favorite release of 2016. Solange's A Seat At The Table is an inspired work of genius, standing shoulder to shoulder with anything sister Beyoncé has produced over the last couple of decades, which is no mean feat. It is a difficult album to categorize: a blend of R&B, jazz, rap and soul threaded together by Solange's voice that might lack the lung power of Beyoncé, almost gossamer in some parts, yet is always affecting and impassioned. The production and instrumentation is fabulous, lending the music an almost woozy, loose, carefree feel. Listen to the gorgeous alternating strings and lilting bass-line that form the canvas for "Cranes In The Sky" or the shuffling beats and stop-start jazzy bass in "Don't Touch My Hair." I love everything about this album: the music, the lyrics, the production, the politics, the videos, the album cover...everything.

Riff Of the Month
Guitar riffs. It's been a long time since I heard a guitar riff that made me turn up the volume to 11 and head-bang. I first heard the clichéd but blistering riff on Reading-based four-piece The Amazons' turbo-charged "In The Mind" driving up the M25 between junctions 9 and 10 (probably not the best place to start headbanging). Listen to this LOUD, because Muses’s Matt Bellamy must be kicking himself for not thinking up this riff.

Guilty Pleasure of the Month
At the other end of the spectrum, a guilty pleasure: Mary Hopkins' "Goodbye" released back in 1969, the follow-up to the ubiquitous “Those Were The Days.” It has a swooping melody that could only have been penned by Paul McCartney, in the days when he was so prolific he was giving away tunes that most musicians can only dream of writing. There is a vulnerable tone to Hopkins voice that imbues Goodbye with pathos when it could have sounded twee. I've also included a Bob Dylan song in honor of him being awarded the Nobel Prize for literature. He is currently ignoring their bequests to attend the ceremony, upholding the mystique as ever. I picked a Dylan song for the lyrics and with dozens to choose from I plumped for “Lily, Rosemary and the Jack of Hearts” from 1975s Blood on the Tracks, eight minutes of genius wordplay unmatched by anyone before or since.

Other Stuff
What else have I been listening to? All manner of stuff. I worry that anyone listening to the entire Spotify playlist is going to wonder whether it is humanly possible to like all those songs. I've included a new track from the rejuvenated "Kings of Leon". To be honest, they have never been my cup of tea since I find them a bit cold and aloof, however their seventh album Walls seems to have a bit more grit and “Around The World” chugs along nicely. Plus Nathan Followill is a wine aficionado according to a recent interview in Q magazine. He has a penchant for 1982 Château Margaux and 1962 Penfolds Bin 60A: wines you can afford when you pen a worldwide hit like "Sex On Fire." I've also taken a shine to young Australian singer-songwriter Julia Jacklin's album and in particular "Coming of Age" that has a maturity beyond her years. She’s a talent to watch out for in the future. Sometimes I find myself wanting to make silly shapes on a dance floor in a haze of dry ice and in those instances I would turn to something like Tieks ft. Dan Harkna "Sunshine," a song that channels the soulfulness Joe Smooth or Ten City from back in the day. Last but not least, I’ve included two songs called “Marrow,” one from St. Vincent’s debut album (Youtube the astonishing live performance on David Letterman if you can) and the other from Anohni’s fantastic Hopelessness, released earlier this year. Neither are about the vegetable.

What I've Been Watching...
What have been watching recently? Not Bake Off. Not X-Factor. No, I've been watching "The Amazing World of Gumball" on Cartoon Network. Forget all those convinced that the zeitgeist of children's TV was in the 1970s when puppeteers were all on LSD in some futile attempt to corrupt young minds (actually, maybe it worked when I survey my friends). The golden age is now. Cartoon Network changed the rules of children's TV with impeccable, game-changing "Adventure Time," the kind of animation Studio Ghibli would make if they hired William S Burroughs and Haruki Murakami. Basically gonzo kids TV with subtle adult subtext. This was soon followed by two more era-defining animations both as brilliant as each other: “Regular Show” and “The Amazing World of Gumball.” Both are funnier than most adult comedies: more intelligent, more affecting and totally totally off the wall. I like the way Gumball mixes normal cartoon animation with stop-start puppets and real-life backgrounds, jumbles them together to create almost chaotic visuals. I like the fact that characters include a banana, a sunflower plant and a T-Rex. I love the adult subtext, the neuroticism of the mother and the Homer Simpson-like goofiness of the father, the Tom and Jerry violence mixed with its unrelenting shameless stupidity and arch cleverness. It was difficult to choose one clip but the one below manages to fuse Titus and Andronicus, rap music, Lord of the Flies and Nazi book burning into one song. How this is going to affect malleable kids' minds I do not know...we'll find out in 20 years' time.

Neal Drinks A Cup of Coffee

Sitting alone at Café de l’Ambre, neatly filed away down a Tokyo side street just a block away from Shimbashi station, I put down my rucksack that contains my trusty iPad, a useless wooden toy courtesy of JAL and my current book (Amanda Craig’s Lie of the Land—highly recommended), and then peruse the menu. It’s not long or fancy—just a double-sided laminated page. The sign on the door had forewarned that choices might be limited. It read: “Coffee only.” Just coffee? No chocolate brownies or cakes with pretty sprinkles? Don’t tell me there’s no wi-fi...  Limited to a single beverage might disappoint the paying customer in any other café. On the other hand, this is not any other café. Thousands of coffee shops, or kissaten, populate this endless metropolis, yet it is Café de l’Ambre that attracts pilgrims far and wide. At the far table, a portly American gentleman in his mid-50s sits quietly on his own, keenly observing the baristas diligently working away behind the seated counter. Japanese workers, whether in a shop, restaurant or a bar, always look busy because their mindset is one of discipline, hard work and attention to detail, whereas the French look busy when...

Continuing on from yesterday, I examined the release prices of 2016s, took a peek at prices of recent vintages and came up with a list of wines that I would buy. (I also included an alternative vintage, if I sought a mature bottle ready to pop.) Readers should note that the real bargains are probably at the Cru Bourgeois level or satellite Right Bank appellations. The problem is that many are not actually sold en primeur or they are sold directly to distributors, which means I do not have access to price information. You will notice that there are wines that I praised from barrel but do not appear below, either because their price increase made them less attractive vis-à-vis another or simply by limiting myself to a dozen names. One observation is that the long list contained a majority of wines from the Left Bank. This might be explained by greater price inflation on the Right Bank, which is nothing new. Estates are generally smaller in Saint-Émilion and Pomerol and therefore have less risk of unsold stock if they choose to pursue a much higher price.  Cos d’Estournel  The estate released the Grand Vin at €120 per bottle, the...