My first Chinese meal was at age fifteen, about fifteen years too late as far as I am concerned. I remember it well. My family had packed their buckets and spades and driven down to the Devilish seaside town of Dawlish on holiday. Nothing against Dawlish, but we had frolicked on the same beach for several years and it had long lost its childhood sparkle. Therefore, I persuaded my parents to let me stay at home so that I could host a massive all-night house party for my teenage friends. Inadvertently, I forgot to tell them that last piece of information.

On the first night, forced to fend for myself, I took a cursory glance at the kitchen then cycled round the corner to the local Chinese takeaway and gazed up at the foreign-sounding dishes. I had to steady myself on the formica counter. None of them, not a single dish, came with chips. Was there not an Essex bylaw that forbade such culinary faux pas? A Chinese grandma, who must have been born at some indeterminate point during the Ming dynasty, took pity on me and kindly suggested your common-and-garden sweet 'n sour pork balls. I took a paper bag home. I popped the first one into my mouth. It was gustatory nirvana...even without chips. Sure it was no Manchurian feast. The menu at my local Chinese did not extend to delicacies such as a Thousand-Year egg, braised pig intestines or Shanghai hairy crab. However, it was the catalyst for my love affair with Chinese cuisine.

London is festooned with innumerable Chinese restaurants. When I first lived in the capital city, I spent many evenings wandering around Chinatown, practically lived in the famous Won Kei with its rude, short-tempered waiters and to this date, the best crab and sweetcorn soup I have ever eaten (although looking back I think it was 80% MSG). Won Kei was cheap and delicious: virtues that go hand in hand apropos Chinese cuisine arguably better than any other country. However, my favorite Chinese restaurant of them all is unquestionably Royal China.

I was long overdue a visit.

Would it be as good as ever?

Restaurants come and go. There is a constant lure of booking a table at the latest hot name so that you can brag about dining there when the ink on the menu was barely dry. However, there are institutions that almost instantly become part of the fabric of a city. Prospering over many years and sometimes decades is, at least to this writer, the true testament of a bona fide great restaurant. Casa Camará is one such place that I recently reviewed. Royal China is another. No, it is not nearly as ancient as that Spanish institution since it is only 20 years old, yet it already feels as if it had been there since time immemorial.

There are two or three branches of Royal China, though I tend to frequent the founding Queensway branch, located just outside the tube station on the posh side of Hyde Park. I tend to frequent during daytime because the menu is ridiculously cheap. The decor is less shabby than it once was, fake gold on black lacquer and obligatory dragons. Stick a disco ball on the ceiling and it could moonlight as a 1980s nightclub. The atmosphere is guaranteed to be lively and probably noisy with families giving their kids a perfect education in Cantonese cuisine. If you want a quiet romantic meal, then Royal China is not the place to come. Be warned: there is no lunchtime booking policy. You turn up, take a ticket with legions of hungry diners waiting in the holding area and hope that your number comes up too soon. On a Saturday lunchtime I waited 20 minutes, which is not too bad and seems about average. And it is worth the wait. I have been to plenty more expensive and reputed Chinese restaurants, yet nothing is as consistently delicious and satisfying as Royal China. Factor in that a majority of dishes range between three and six quid, it beggars belief that the food can be this good and that's why after so many years, people still flock from afar and contentedly await a free table.

Royal China is renowned for its dim sum. Their website has the hubris to boast that it is better than most found in Hong Kong. I'll diplomatically say that it is equal to the best I have eaten over there. What makes it so good is that everything here is prepared fresh to order and they can do that because it is a relatively large restaurant, so there is a constant flood that allows the kitchen to run efficiently and without having to prepare everything in advance. I agree with UK restaurant critic Andy Hayler (whose website is well worth reading if you have not done so), that Royal China is superior to anything that London's Chinatown has to currently offer.

My personal favorite is their prawn cheung fun, a rice noodle roll from southern China named after a pig’s intestine because of their tubular appearance and not because it is an ingredient. Those bad boys are pictured at the top of the page in the banner image. They are so sweet and packed full of flavor, the noodle itself obscenely glutinous and melt-in-your-mouth delicious, the soy and sesame sauce adding the necessary sour edge. You ever get that feeling when you eat a dish, and if there was a sudden decree that you could never eat anything else ever again, you actually wouldn't mind? Well, you may experience that feeling here. My advice: back up the truck and order two or three of these dishes, because I can guarantee one is not enough. 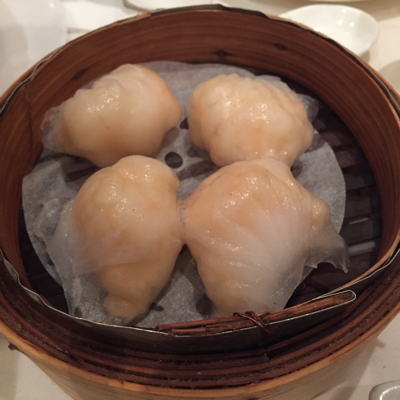 The prawn dumplings (pictured) and Shanghai dumplings were outstanding, as good as anywhere I have eaten in the world. They just get the consistency spot on every time, remarkable when you consider how many covers. Similarly the roast pork and sweet lotus buns (bao buns), which I basically lived on when I lived in Tokyo, are as good as it gets. I love the chewy texture of the bun, which seems quite plain until you reach the sharp tang of the savory filling. Like the cheung fun, be warned, you’ll be re-ordering. The pan-fried gyozas where very good, if not quite the best I have eaten, though the beef ho fun was perfectly seasoned.

After 90 minutes our bellies were full. Service can occasionally be patchy when the restaurant is packed, but we received all the dishes promptly by the young waiter. We did not drink any wine because the list is not exactly a catalogue of rare Burgundies, moreover, I am not a great fan of wine with Chinese cuisine because of the strength of its sauces and marinades. By the by – I was here for the food. And so to answer the original question: is Royal China the best Chinese restaurant in London? Sure, there are swankier and trendier restaurants, most notably Hakkasan and Yauatcha, but they do not have the charm and authenticity of Royal China. Plus of course, they are both many more times expensive. So to answer that question, yes, Royal China is the best there is in London. The best ain't always the most expensive.