In the early 1990s I whiled away many a weekend with Jim, an old school-friend and fellow reprobate, who lived in a shared student Georgian townhouse right in the center of Brighton. Jim had upgraded from Southend-on-Sea to this alternative playground draped over the South Downs and overlooking the English Channel. Brighton was a ragtag of snotty nosed students, ravers, musicians, bongo-players, druggies, libertines, philosophers, punks, hipsters, vegans, performance artists, layabouts, Goths, crusties, psychics, lesbians, gays, dogs on string, cosmic dancers, Rastafarians, daydreamers, dope dealers, speed freaks, tattoo artists and weirdos... and they were the normal people.

Brighton was like Glastonbury permanently moored off the south coast. It was a fairly ramshackle down-at-heel town that reveled in antiestablishment ideals. I would crash out at Jim's pad, not unlike the house occupied/demolished by Rik and Vivian in "The Young Ones." To this day the scent of joss sticks takes me straight back to that halcyon era. I am unsure whether the student house was ever cleaned. The interior was always a bit gloomy, as if sunlight preferred to remain outdoors. I never actually saw a vacuum cleaner and I know that when Jim inexplicably dropped his entire plate of chicken madras down the back of the washing machine one New Years Eve (don't ask) - it was still there a few months later. But who cared about cleanliness when there were so many clubs just a walking distance away, so many gigs and parties and strange people to meet? In terms of food, none of us had much money, but there were always greasy cafes and the ever-popular Food For Friends.

Skip forward 20 years and Brighton has retained its alternative vibe for sure, yet it has changed remarkably. It has maintained its hipster credentials, but money now laps upon the beach from City workers commuting to London, chichi patisseries, tourists flocking to famous "Lanes" and a new marina. Food For Friends is still there but smartened up many years ago. Yes, there are still more lesbians and vegetarians per square foot than any other part of the U.K., but Brighton's charming veneer is scum that has been scrubbed away by wealth. And with money comes a thriving restaurant and wine scene. Of course, Brighton is the natural home for natural wine bars and its most famous vegetarian restaurant Terre-à-Terre has one of the most organic/biodynamic lists in the country. 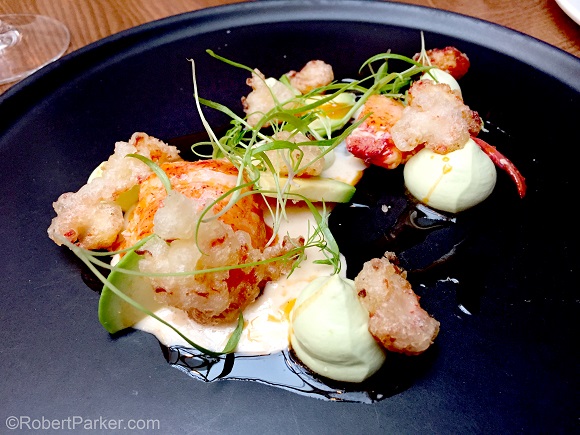 When I visited Brighton recently, I considered Terre-à-Terre, but I wanted to check out a restaurant that catered for carnivores and so booked a table at The Coal Shed. Located close to the South Lanes just a pebble's throw from the beach, The Coal Shed has built up a strong reputation alongside its sister restaurant The Salt Bar. It has a cozy interior: rustic in feel, almost bistro-like, simply furnished with some aesthetically pleasing, old-fashioned, bare light bulbs suspended overhead. The Coal Shed is renowned for its top-quality steaks but I was in a pescatorial mood. So first up, a beautifully presented dish of lobster, crayfish, avocado mousse, Japanese yuzu and srirachi. The lobster was succulent and oozed with flavor and combined brilliantly with the avocado, though I found it difficult to detect exactly where the yuzu was located. Nonetheless, it has a lightness of touch that was very satisfying.

For the main course, the day's special: a whole gilt-head sea bream caught locally down in Hove, served with a creamy leak and garlic sauce, with pot of creamed spinach. I am a sucker for a whole fish staring up at me on the palate from its milky eye. I love stroking off the meat away from the bone and praying none become lodged in your throat. The sea bream, an underused fish in my opinion, was cooked perfectly; the fish skin crispy and lightly seasoned, though I felt that the sauce could have been just a little thicker. The main was deceptively filling and so I skipped pudding, though the waitress, aware it was my birthday, presented a salted caramel fudge and chocolate with a candle atop.

The wine list is well chosen and reasonably priced with a dozen or so respectable wines by the glass, and a few fine wine gems plucked from Bordeaux and Italy. As usual, regrettably the brilliant German Rieslings are ignored completely. One can blame restaurants for lack of nous; then again, I know how difficult these wines are to sell through to consumers who still equate German wine with shonky Liebfraumilch. It's a catch 22 situation - how are people's views going to be changed if there is no opportunity to choose them on a wine list? I settled for a 2014 Muscadet-Sur-Lie from Château de Bretesche that perfectly offset the sea bream with its grapefruit and lime notes, offering commendable weight in the mouth. Muscadet suffers the same image problem as German Riesling, but there are so many brilliant examples out there at just ridiculously low prices. Incidentally, readers should also note that they operate a BYO Monday where you can bring your Petrus or DRC for free.

Twenty years ago, a restaurant like The Coal Shed would have been unthinkable in Brighton. Now it is part of a burgeoning scene that is making it a culinary destination. Lunch or dinner followed by a refreshing promenade along the esplanade... what could be better? I guess I miss the old Brighton that I grew up with, although the deeply ingrained antiestablishment ethos has meant there has been more resistance to gentrification and urban homogeneity than other towns.

And Jim?
I rarely see him these days, but I know he is still down in Brighton and who knows... maybe he has cleaned up that curry behind the washing machine.