To pay off student loans from Cornell University where Pastuszak studied both neurobiology and the aforementioned classical piano—not exactly what you would expect of a “wine guy”—he tended bar at local Stella’s, where he would go on to become the general manager at both Stella’s and its sister restaurant. He became the director of operations in 2009.

In 2011, Pastuszak returned to the city, becoming the wine director of Tom Colicchio’s (now defunct) Colicchio & Sons, before joining the Make It Nice team the following year. 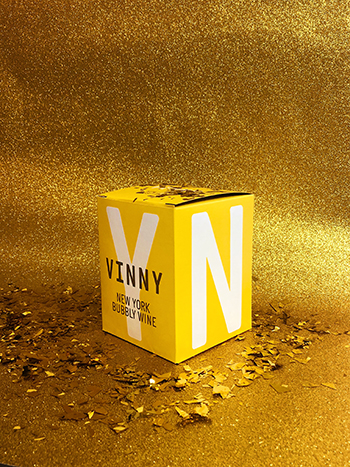 In 2014, Pastuszak and winemaker Kelby James Russell of Red Newt Cellars debuted Empire Estate wines using grapes sourced from his beloved Finger Lakes. He launched VINNY, a canned sparkling wine—a first for him—this summer. “The goal is to deliver a delicious, refreshing, dry wine that can be enjoyed anywhere—especially where bottles cannot go!—and at a terrific value,” he says. “Also, as a sommelier, I just want more people drinking wine and loving it as a part of their life—a bottle of wine is still intimidating for a lot of people, so to introduce a wine that is made from New York grapes, in an accessible format that can get beer and soda drinkers comfortable with wine, is an excellent foot in the door for all of those potential future wine drinkers.”

We chatted with Pastuszak about his on-going quest to educate wine lovers about the Finger Lakes and what lies ahead in the future.

What is it about the Finger Lakes that piqued your interest during your early years?
The Finger Lakes was the region I was living in when I was really first starting to get into wine—so while I was reading about regions in textbooks that were thousands of miles away, like Champagne, Barolo and Burgundy, the best Finger Lakes vineyards were just a 30-minute drive from my apartment, which made it convenient for me to want to learn more and get hands-on experience, when I wasn’t busy working in restaurants. On days off, that meant spending time in vineyards and in wineries, often helping in friends’ cellars with odd jobs, but it all helped solidify my love for the region, seeing firsthand the hard work that went into not only the picturesque vineyards, but also the finished wines. Then, when I moved back to NYC and realized how under appreciated the region was, and how much I could do with my voice in restaurants to help spread word about the best wines coming from the area, I fully accepted the challenge and was locked in for the long haul.

What is it like to be involved in so many projects at once?
Exciting, invigorating ... and definitely exhausting at times! There’s much that can be said (if it isn’t obvious, calendar management and lots of coffee are essential!) ... but in short, it is refreshing to be able to wear so many different hats and use so many different parts of your brain and skill set, all within the industries that I love to work in: restaurant management, wine list curation, wine production, distribution & sales, and more. To connect with people on so many different levels, all the way from the growing and production level, to the end user, is also really special. I feel like it’s given me a better sense of how the wine and food & beverage industry interacts (much more so than when I just had the restaurant perspective alone), and also how these industries have evolved so much and have woven together more in these recent years.

What do you think makes a great wine?
If I had to generalize, I would say a great wine should bring joy and excitement to the person that is tasting it. It should show balance, energy, tension, and deliver flavors and aromas that draw the taster back in for more after each smell and taste. A great wine is also delicious at all stages of its life, whether in its infancy and youth, or when it starts to take on some age and develop new characteristics altogether.

How do you differentiate yourself from the pack? Is there something special you’re trying to accomplish with the fruit that will set you apart?
With Empire Estate, the focus is on just dry Riesling—we really make just the one wine (and a small bit of Reserve wine) that is true to Finger Lakes terroir, but stylistically inspired by my favorite dry Riesling producers in Austria and Germany. Why just one wine? The idea is that in trying to spread word about Finger Lakes and introduce this region to many other wine-loving markets (that’s one of the main goals of Empire Estate: rise the tide for all ships), you often only have a brief opportunity to really make an impression on tasters. So we try to build the most complex and complete wine, comprised of numerous vineyard sites, and bundle it into one focused package. Many of the techniques we use in the production of Empire Estate are more typically seen in Europe: extended skin contact before pressing, a combination of native yeast fermentation and the use of Austrian and German yeasts (in both stainless steel tanks and older, large-format barrels), extended lees contact, and reductive winemaking practices. Additionally, all of our vineyards are picked in multiple passes, and all fermented separately with varying techniques to build complexity: with about a dozen vineyard sites going into our most recent vintage, and multiple ferments per site, we’re looking at nearly 40 different independent wines that will eventually comprise just that one dry Riesling!

How do you envision the Finger Lakes changing in the years to come?
The Finger Lakes has always had excellent farming, and the quality just keeps getting better and better, especially as it relates to grape growing; so the viticulture will only continue to improve as there is greater demand for high quality wine from the region (driven by consumers, as well as the wineries in the region). Additionally, the number of producers is growing, and I see it continuing to grow, through a combination of folks coming from the outside, eager to make wine in the region, as well as young, passionate winemakers who have been working as assistant winemakers and wanting to start their own label/production. On the food & beverage side, I also see more exciting restaurants and hotels/inns/AirBnB’s being opened, to provide more delicious and comfortable options for those visiting the area!