Do We Have to Call It Vegan?

Calling a restaurant “vegan” undoubtedly helps to identify it to those with (sometimes hard-to-meet) restrictions, but it also puts a chef’s menu in a subculture whose history and connotations may be at odds with his or her overriding philosophy of creativity and openness.

Earlier this month, former Eleven Madison Park and NoMad sous chef Champ Jones opened Sans in Brooklyn’s Carroll Gardens neighborhood, a restaurant that instantly joined the ever-growing list of New York City restaurants deemed “vegan.” For his menu, Jones took inspiration from “more decadent [animal-based] dishes like foie gras and caviar,” which he studied and created in his former positions at EMP and The NoMad. “For example,” he says, “I've taken a foie gras technique and used plant-based fats to create a vegan version with a similarly unctuous texture.” 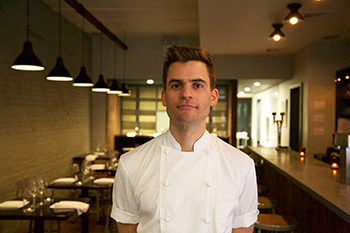 Like most in the restaurant world, Jones resists cultishness, delineation and grouping, as well as over-eagerness to notice the new in the natural. “It just so happened that this space opened up at a time and in a place that felt right,” he says of opening Sans in Brooklyn, suggesting randomness over premeditated assumptions about eater preferences and their corresponding geography.

“[This] restaurant could have been in California, but there are many people interested in ways they can shift toward a plant-based diet regardless of their geographic location.”

In a conversation about the national climate around veganism, Jones insists on shifting the dialogue. “We don't need to pit soy against beef,” he says, noticeably avoiding the deepening of overly (and, as he implies, unnecessarily) ingrained divides between vegan and non-vegan food. “It's more about finding satisfying combinations of salt, fat, acid, etc. that are universal to eating.”

When it comes to the identity of chefs, however, Jones does concede to some part of the storied distinctions. “New York City industry professionals who are focused on vegan dishes still remain at the periphery,” he says. “But there is clearly a shift toward less animal protein-centered plates. At the same time the foundational training of most chefs in the city is to use dairy, eggs, and meat, so it's perhaps unfamiliar territory.”

Jones seems most interested in the pure curiosity and openness of eaters—both professional and lay—and relies on these traits to open (and de-stigmatize) niches of eating to everyone. “In just the short time we've been building this project, we've received a ton of interest from non-vegan people who want to understand what we're doing,” he says of Sans’s first week. “There's a latent curiosity and interest that seems to be out there.

A restaurant can serve less meat (“meat-less,” if you will) and not be absolutely meatless, he seems to imply, and still be worth talking about and equally not worth talking about at all. “There are a lot of fine dining restaurants that are able to tweak their menu to accommodate vegans,” he adds as a reminder. “They can put out vegan food that is creative and delicious.”

Among the more meatless of Jones’s favorite “meat-less” institutions in New York City are Superiority Burger, the East Village sensation from former Del Posto executive pastry chef Brooks Headley serving (actually) meatless sloppy Joes and Muenster cheese pickles to adoring fans of all inclinations. He also liked the “vegan and vegetarian options John Fraser offered at Dovetail,” he says. “I was bummed to see that place close. But check out his restaurant Nix.” That goes for everyone, vegan, vegetarian or otherwise.

Eat and drink your way through The Big Easy with Chicago-based chef Noah Sandoval.