With more than half a century of history and 1,000 awards under its belt, Wolf Blass is one of Australia’s most iconic wine labels. Founded by German Wolfgang Franz Otto Blass in 1966, the Barossa Valley winery has become one of the most successful wine brands in the world, most recognizable for the revolutionary colored labels it uses to designate its tiers. 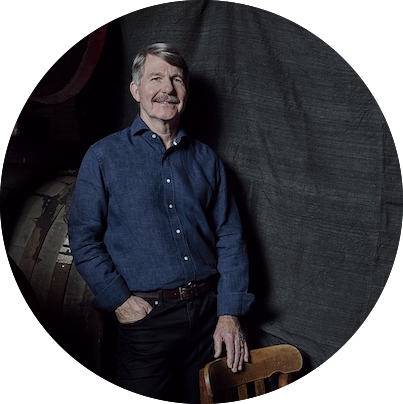 Now considered one of Australia's leading winemakers and a highly respected wine show judge across the globe, Chris Hatcher first joined Wolf Blass in 1987, working on its white and sparkling wines. In that decade, Chris made wines that won 39 trophies and 218 gold medals. He was also responsible for steering the success of the Wolf Blass white wine range, making strides in the global export market.

In an oft-recounted story, Hatcher insisted that the Wolf Blass Black Label be entered into a blind-tasting competition in 2008 against 30 of the most iconic wines in the world, some costing upwards of $2,000 a bottle. Many thought it was a crazy idea, but he was vindicated when the Black Label emerged with an almost perfect score.

After 30 years with the company, Hatcher has moved up to be its chief winemaker, overseeing its entire winemaking operations. His attention to detail in the winery and the tasting room has helped produce the quality, consistency and character that Wolf Blass is renowned for.

We chat with the revered winemaker to find out his thoughts about Australia’s vibrant and ever-changing wine industry.

What is one thing you wish more people knew about Australian wine?

Riesling. It's one of the great wines made in Australia that is dry, has incredible fruit character, balance and acidity. Australian Rieslings are very refreshing and certainly suits many types of food (particularly Asian!) and is not heavy on the alcohol. The updated Australian Chardonnay style is also elegant and refined, which a lot of wine drinkers may not be aware of.

What are some up-and-coming wine regions in Australia you think people should take note of?

Tasmania is one region that’s starting to be recognized and has great potential. The grapes that shine are Chardonnay and Pinot Noir. There is also sparkling wine and you can get elegant red wines such as Shiraz. We’ll be seeing more of these expressions in the next few years.

Adelaide Hills is getting more recognition and regions such as Barossa and Coonawarra are making more modern styles of wines that show more elegance and less winemaking influence of oak, allowing vineyards to express themselves in the wine.

What’s a trend you think will emerge from Australia?

We are seeing more sub-regional wines. For example, at Wolf Blass, we have this series called Estate of Barossa. We have wines from Lyndoch (lower end), Dorrien (middle end), St John’s (higher end) and Moculta. There are two to three weeks in difference in picking from the lower end of Barossa to the top end of Barossa, so it allows you to taste the various expressions.

In your observation, how has Australia’s wine industry evolved in recent times?

What has changed tremendously is the focus on our vineyards. Viticulture in Australia was more basic in the 1960s—people were growing grapes, sheep and grains. There was not much professional viticulture. Today, there is more professional growing of grapes and a much better understanding of what grapes and varieties do well.

How has Wolf Blass evolved since you became chief winemaker in 1996 and what is it like working for a label that is not just part of Australian wine history, but a major influencer of the industry?

The style that our founder, Wolfgang Blass, established expressed great gift of palate with a softer tannin structure. We still maintain this style but because of viticulture methods available today, we don’t need as much oak to achieve the same style. The wines have evolved to one that shows more vibrant fruit, but is the same style as it was established in 1996.

And when Wolf started, he built American oak up so there was drinkability and structure in the wines. Now, Wolf Blass wines have much less oak and a higher percentage of French oak. The overall structure is made for drinkability.

At the end of the day, it’s about respecting your history and being very mindful of that. You continually evolve and stay relevant to the modern era.

5 of Europe’s Most Authentic Christmas Markets

These beautiful Christmas markets date back to the Middle Ages and see millions of visitors every year.

Fluffy on the inside and shatteringly crisp on the outside, Blumenthal’s recipe for perfect French fries is one of his proudest legacies.