How to Prepare Steak for a Crowd

He may be a little biased, but chef Bryan Voltaggio—half of the sibling duo behind Voltaggio Brothers Steak House—is partial to beef. "How many times have you had turkey or ham, or the standard large cuts of meat on your table?" he asks. "It's boring." Instead, he's encouraging dinner party hosts to experiment with steak as the centerpiece.
Many people are intimidated by cooking large cuts of steak, but Voltaggio wants to demystify the process and prove that it can be just as straightforward—if not more so—than any other protein. He shared his tips during a class at he and his brother Michael's beef-centric restaurant at MGM National Harbor.
Choosing a Cut
When cooking steak for a group, Voltaggio says it's best to rely on large, thick-cut steaks instead of trying to juggle multiple individual cuts and cooking each to the exact preference of every guest. Opt for 36- to 42-ounce cuts, and aim to have about five to six ounces of meat per person. This way, even for a large party of 12 to 14 people, you'd only need to cook two steaks.
Voltaggio's go-to selections for serving multiple people are porterhouse and bone-in rib eye steaks. Unlike a simple filet, which is naturally a very tender cut, porterhouse and rib eye steaks require more finesse when preparing and cooking. That's why Voltaggio finds the results more satisfying. 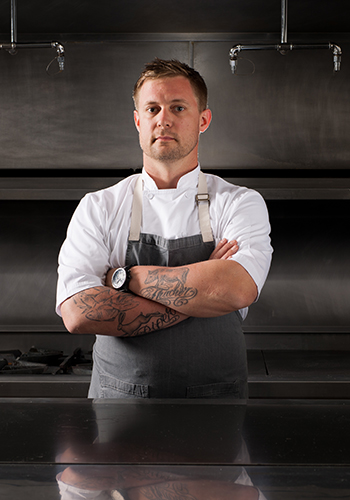 At the butcher shop, make sure you're asking the right questions. "You want to grill your butcher a little bit," Voltaggio says. "Show him that you're the boss." Start by verifying the USDA grade of your steak. This rating is based on the marbling and fat content of the meat. While USDA Prime is the highest grade, only two percent of meat falls into this category. That means it comes at a premium price point and is typically reserved for upscale steak houses.
Voltaggio believes that USDA Choice is a perfectly good substitute that still has great marbling and gives you a good bang for your buck. "There's a lot of great value in Choice," he says.

Voltaggio says it's also wise to look for a brand or farm you trust. He uses Pat LaFrieda beef from Creekstone Farms at his steakhouse. There are plenty of options out there, but he recommends looking for beef that is certified humanely-raised in the United States without GMOs, hormones or antibiotics. He adds that grass-fed and grain-finished beef will provide the best marbling and flavor. When you're ready to order your steaks, ask your butcher to slice it for you on the spot so you can get exactly the cut and size you're looking for.
Preparing Your Steaks
The key to making a large cut of steak flavorful is to start preparing it the day before. "A lot of people think that if you salt meat ahead of time, 'is it going to dry out' or 'what's going to happen to it?'" However, salting your steak will provide flavor and make the cooking process much smoother.
Twenty-four hours before cooking, Voltaggio recommends using a fine ground salt to season the steak generously and evenly on all sides. "I don't use flake salt, Maldon salt or finishing salt because it doesn't really coat the whole thing," he says. Place the salted steak upright on a rack or a plate in the fridge so the air can circulate all the way around. As it sits, the salt will permeate the steak and get rid of excess moisture on the outside. Remove it from the fridge and let it sit at room temperature for about 30 minutes before cooking. "When you put it on the grill or when you go to sear it in a pan, it won't spatter on you and it also won't stick," he says.
"This isn't the only salt that you're going to be adding to the meat," he adds. "It's going to start the seasoning process, but once we slice this, you're going to want a little bit of that flake salt just to finish it."

Cooking the Meat
While most of the steaks at Voltaggio Brothers Steak House are cooked over wood charcoal, Voltaggio says you can also pan-sear a steak and get great results. Be sure to use a cast-iron pan as it will provide the best distribution and retention of heat so you don't have to shift the steak around in the pan as it cooks.
With the burner on high, heat the pan and then add a bit of neutral, high-heat cooking oil, like canola or rice bran, to coat the bottom of the pan. "You're going to want the oil to come up to what's called the smoke point almost, where you start to see a little shimmer in the oil."
At this point, add the beef. "Let that sear on one side without moving it for a good couple minutes," he says. Don't be alarmed when the pan starts to smoke a lot; since beef fat has a different smoke point, it will produce more smoke as it renders.
Then turn the burner to medium high, and flip the steak after a nice crust has formed on the first side. Add butter, garlic, rosemary and thyme to the pan and baste the steak as you continue to sear it on all sides. You want the butter to brown and become frothy, but not burn, so adjust the temperature accordingly. "You're creating a crust around the outside that's creating flavor," he explains.
Now it's time to insert a temperature probe and transfer the whole pan to the oven to ensure your steak is evenly cooked. (Set convection ovens to 225˚F and conventional ovens to 250˚F.)
Remove the steak when the thermometer reaches five to eight degrees less than the desired doneness. For instance, if you'd like a medium rare steak, you'll want to remove the steak from the oven at a temperature between 122˚F and 125˚F. As your steak rests, residual heat will raise the temperature to the desired medium-rare temperature of 130˚F. "People don't trust carryover cooking, but this is how you cook the perfect steak," Voltaggio states.
Pleasing a Crowd
Once your steak is perfectly cooked, let it rest for at least 10 to 15 minutes so the juices won't run out when sliced. Then, Voltaggio recommends carving the steak and reassembling it with the bone on the plate for an attractive presentation and finishing with a sprinkle of flake sea salt.
If you have varying temperature preferences at your dinner party, cooking a larger cut can help you cater to everyone. "As you're carving it, you're able to take some of the pieces that are a little bit more done one the outsides [for those looking for more doneness]. The center cuts you can keep for people that want it more medium rare," Voltaggio says. "Then, if you have to quickly take something and flash it in the oven, it's pretty easy to do."
The most important thing to keep in mind is to err on the side of less done, since you can always pop your steak back in the oven if needed. "The worst thing is to spend all that money on a piece of meat and overcook it."
Photos courtesy of Voltaggio Brothers Steak House.

This article, written by Lani Furbank, was featured on the MICHELIN Guide website. View the original article here.

Treat yourself or loved ones to the perfect wine buff's gift, with access to over 450,000 tasting notes, scores and the latest reports from leading wine reviewers around the world.